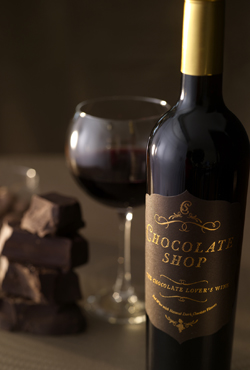 Now, I love chocolate as much as, if not more than, most people and yet even I balked at the idea of chocolate wine. I mean, surely wine is fine on its own and I can choose the chocolate I feel best matches that wine without someone coming along and doing something to the wine for me. Hpwever, sceptical as I was, I still wanted to try it.

A bit about the wine itself though. I’ve gone to the website for Chocolate Shop Wine and they say: “Inviting aromas of black cherry and dark chocolate entwine and continue on the palate surrounded by hints of cocoa powder. Nuances of red wine and residual sugar linger on the smooth finish.” Of the process they go through to actually make the wine, they are a little more secretive:  “Sweetening the tongues for centuries, chocolate and red wine has been the most reliable pairing in history. Chocolate Shop takes this pairing to the next level, marrying chocolate flavor with red wine to create a sumptuous drink. We start with a proprietary red blend of the finest vinifera varietals, add a touch of oak and a kiss of sweetness to create the perfect fruit-driven foil for the rich dark chocolate which unfolds in silken layers across the palate.”

So how did it taste? Well, we taste with our noses and so that first smell was a bit weird I have to admit. It was a distinct synthetic chocolate plus wine scent without any balance or combining. That made me worry about what kind of flavour warfare would happen in my mouth as I drank it. I could tell the wine was going to be a deep ruby red with some tannins but hopefully not much and the chocolate was rounded but not burnt however that’s about as far as my nose could take me.

Once I took a sip – well, that was a different matter entirely. I took a sip assuming that I would have it and throw the rest away and I have to admit I LIKED it on its own in the evening as it is sweet. Unlike the nose which was a battlefield upon which the war raged on, the flavour in your mouth was weirdly nice. It was nothing like a sugary chocolate added to a cheap wine but rather a sweet wine which had notes of chocolate already which had been accentuated through the process. It was simply a very nice red, uncomplex, with some edges of dark fruitiness, where the natural chocolate flavour had simply been brought out with an interesting chocolate, without any bitterness or rough edges. The chocolate flavour, I should point out, does not dominate but is distinct. That is, you absolutely know both by the extremely dark colour and the flavour that this is an altered wine – and altered by the addition of quality cocoa powder.

I have to admit I was sceptical before trying this wine. I thought it was simply a gimmick that would last a short while and then fade away. What I didn’t expect was a nicely drinkable wine whose balanced flavour profile included chocolate notes which had been further enhanced naturally. You are, of course, only going to enjoy this wine if you already like a sweet red which is only slightly fruity but as it isn’t too full of tannins (or maybe that’s just my impression) not only is it a pleasure to drink, it will likely have wide appeal.

So it is a chocolate wine. The nose may be a battleground yet to be won but the wine itself is a glorious harmony with two prominent sections, orchestrated perfectly by the company who makes it. I highly recommend eating something sweet with it as that chocolate flavour does linger with a synthetic note… I’d love to see something more complex done with it and to somehow remove that synthetic flavour.