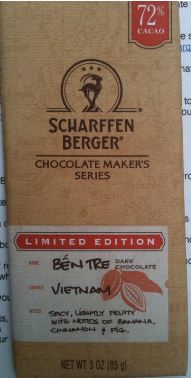 I visited the Scharffen Berger shop in San Francisco and spotted this bar and decided to try it. Now, given who owns Scharffen Berger, it was suggested to me that I not bother. (sarcasm) Apparently small companies bought by larger ones immediately discard what made them unique and merely become another cog in the machine (/sarcasm). As if. *pah*

So I bought the Ben Tre Scharffen Berger bar and decided to rate it as I would any other chocolate (except maybe something like Cadbury or Galaxy – I mean, it wouldn’t be fair in those cases). The packaging had been printed to look like unbleached paper with a rustic, hand-printing on it. It was, of course, not Askinosie and so nothing of the sort but it was a cute effort.

The chocolate itself had a delightful fruity but earthy smell. As you open the wrapper, you absolutely get a deep, dark fragrant chocolate flavour. It’s like when you first open a jar of instant coffee to a certain extent. The scent promises a world of delicious joy and blissful taste. If only the crystals lived up to their bold promises… 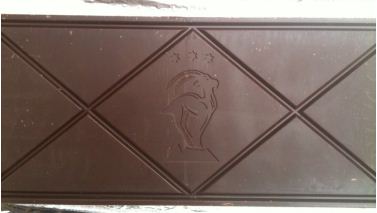 The actual flavour of this bar is… different. ‘Different’ is the best word I can come up with really. It has a slightly drying effect in the mouth and as the fruit struggles to emerge it seems almost flattened on the palette by a sour note in the chocolate. It is not a gritty chocolate but it is less refined than some chocolate I have tried. The melt in the mouth is even and not too quick and you are left with a chocolate-covered raisin taste in your mouth and yet… there is that sour note and it really spoils the chocolate for me.

I can’t quite put my finger on why I’m not as big a fan of this bar as others. It smells great, has that red fruit I love and yet I just don’t dig it. It could be that sour note that kept interfering with my enjoyment of the fruits that is stopping me being an enthusiastic fan. It could be the slightly drying effect in my mouth.

All in all while not bad, it isn’t my most favourite bar. I do like it though so if you are in a place where the chocolate I talk about here is unavailable and accessing better chocolate isn’t feasible (this is especially true in the summer months) then I would recommend getting this bar.