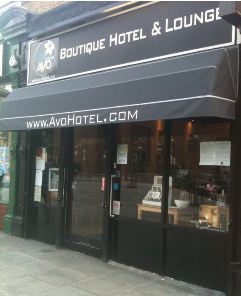 I found myself somewhere I don’t often find myself for this event – off-piste having only a London Overground train to take me to Dalston Junction. The Hackney locals were thrilled by the location but being outside my comfort zone I didn’t know any of the buses or anything so was nervous. Luckily the small boutique hotel was not far at all from the Overground. 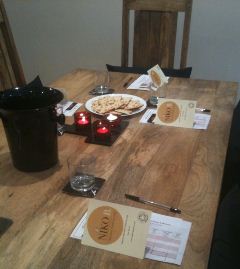 I had been invited to experience Niko B Organic Chocolate’s wine and chocolate pairing. With fresh chocolates and somewhat surprisingly inexpensive wine from Aleksic & Mortimer, the purpose of the event was to taste chocolates with wine at the same time. We were all instructed to take a bite of the chocolate before taking some of the wine and mix the two in our mouths. This forced everyone to try the two together rather than separately. Rebel that I am, I chose to try the chocolates on their own as well. Each pairing was unique but only one I felt offered the delightful complexity and interesting variety of flavours that really excites me but everyone present had a different favourite combination. 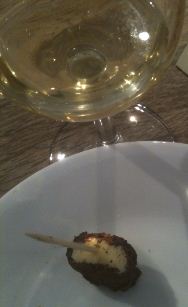 Citrus & Jurancon – The citrus chocolate was a combination of lime, thyme and sea salt. The Jurancon was a sweet dessert wine. The chocolate here is a white chocolate ganache infused with thyme, lime and mixed with a bit of sea salt. The sea salt here was really subtle and hardly detectable. The lime was an immediate top note which quickly faded with the thyme supporting the mid-range of the flavouring. The wine paired with this was an extremely sweet wine which I felt actually improved with the chocolate. The two flavours though when combined threw the thyme more to the fore and so as it combined with the wine it was quite distinct and different. This sweet white was extremely drinkable though and I would happily choose it again. 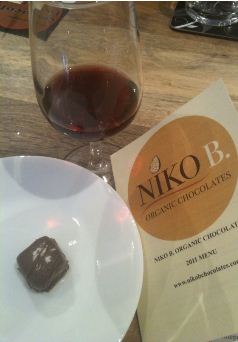 Fog & Vosne Romanee – Here this older wine was a very clear, lightly apple red colour that you could see straight through. They call this a challenged wine but something interesting happened here and I think of the evening this was my favourite mix – when blending the bergamot of the earl grey tea and this wine together the complexity of the wine increased and it calmed the acidic edge to the wine and made it not only extremely drinkable but deliciously complex with rounded edges. I think the 2007 pinot noir here was really a brilliant pairing and made it better.

Bliss & Madiran – I found the raspberry of the Bliss chocolate completely subsumed here by the mint. The strong fresh green mint flavour was delicious but I didn’t get much of the raspberry without the wine. Once I added the very dark and young ruby red Madiran to it, I could just catch the edge of the raspberry in the chocolate. Of course these were fresh and made in small batches so it might just have been mine. Here I think the combination of the red wine and chocolate rounded out all corners and edges and exposed complimentary flavours that many at the tasting found delightful. I think the use of dark chocolate here might have slightly overwhelmed the raspberry but otherwise it is a delightful chocolate. 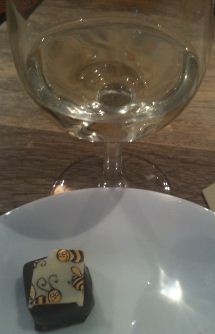 Amore & Santenay Blanc – the wine is a chardonnay from Burgundy which is a bit different and the chocolate here is a rose oil with citrus and cinnamon ganache. The rose oil is quite strong and edges on to almost having a geranium edge to it. The inclusion of the rose oil seems to have overpowered the citrus though (as it often does in aromatherapy as well) and I couldn’t quite get the cinnamon in the chocolate. The chocolate has a nice flavour but when combined with the chardonnay which, on its own, had the edge of gooseberries mixed with fresh elderflowers to it, it flattened to nothing. The chocolate plus wine on my palette made water. I cleansed my palette, tried again and got the same sensation – the wine and chocolate rounded each other out so much as to become devoid of any personality. This pairing was enjoyed by others though and some will like it. I liked the second listed pairing because of the complexity so here I, predictably, liked this pairing least but that doesn’t make it bad – just different.

Burnt & Cotes du Rhone Villages – I’m not sure what it is about Cotes du Rhone that sets everyone a titter but this wine caused a stir and excitement at the table Apparently it is the most logical combination with dark chocolate but with people talking about notes of liver I can’t imagine why. The chocolate is one I’ve enjoyed before which is a candied lemon flavour coming from the real lemon zest and real lemon juice from organic lemons which persists with burnt caramel sauce in the chocolate. The filling here is much firmer than the Fog chocolate and does hold the citrus well but changes dramatically when combined with wine. When combined with the wine, the fatty/buttery flavour from the burnt caramel suddenly comes to the fore and the black currants in the wine are completely calmed down. This was an intriguing combination and one that caused a very marmite reaction from people – they either loved it or they hated it. It wasn’t a favourite but it was really cool to experience. 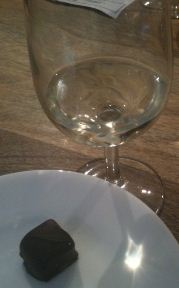 Fever & Val de Loire – this was the most intense combination. In the chocolate the ginger was really struggling to come through in the face of the cayenne pepper which tended to dominate the palette. The chocolate is a lemon, ginger and cayenne pepper ganache filled chocolate which you get an immediate heat off of and while you get a bit of lemon, you swap back to heat again as the ginger and pepper kick in. The wine was a dessert white which was extremely sweet and had a distinct flavour of pear and yet when combined with the chocolate a peppery edge which was not there suddenly came out and the pear flavour really faded into the background. The sweetness of the wine of course helped tone down some of the heat in the chocolate and created a whole new taste sensation.

I’d recommend popping along to anyone and everyone. I went as Nancy Nomates and ended up making 4 new friends! It was an awesome evening with all sorts of chocolate and French wine and so I’d say as soon as they announce the next one, buy a ticket straight away as you’ll not regret it in the slightest!