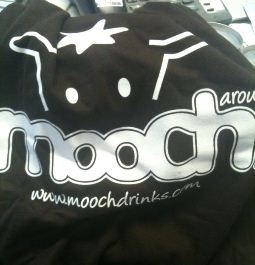 Mid-afternoon I always find myself needing a pick-up and having been sent these Mooch Chocolate Milk cans and having placed them immediately in the fridge, I decided to give them a shot. The mid-afternoon is always kind of a lull – it isn’t the morning so I’m not trying to power through to lunch and it isn’t the home stretch where I am looking forward to going home (I spend 3h commuting every day). It’s just in the middle there and it’s kind of a dull, depressing part of the day. 3pm… what ever happened at 3pm that was fun and exciting on a weekday at work (well, maybe some shaving foam in the face on national TV…)

So I thought, what better way to spend a short break at 3pm than to try some Mooch. Now, I’m a Canuck and to us Canadians to mooch something off someone is to beg to borrow it. In the case of this can of chocolate milk, it would be to beg if off someone so you could drink it yourself. “Can I mooch that off ya?” is a phrase any kid (or adult) has come to fear and loathe so imagine my surprise that a can of chocolate milk was seeming to directly aim itself at being begged or borrowed off someone else. Mind you, I might find myself doing exactly that… 😉 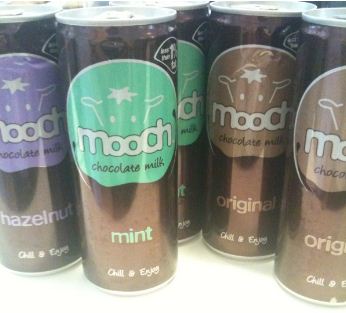 Original – I started with the original can because despite my many chocolate adventures I’m quite conservative when it comes to chocolate. The one thing I noticed more than anything was how rich this was. Maybe it comes from only drinking skinny lattes but it was quite rich in flavour with a pleasant chocolate flavour to it overall. Very drinkable and exceedingly delicious and I have to say I finished the can wishing there was more. Mind you, it was also giving me a massive sugar boost to help me through the afternoon so that could have also accounted for my wanting more 😀

Hazelnut – This was a bit different and was something that I found to be less scary than I originally thought. The flavour of the hazelnut was, in fact, not that bad and not at all overpowering. The main flavour was of the main sweet chocolate milk with the hazelnut a flavour that was enhancing it. This wasn’t like drinking praline which is what I thought it would be like but more like the milk chocolate with a hint of hazelnut. Not being a huge fan I shared it of course and the consensus was sweet but drinkable.

Mint – After the success with the original and hazelnut not being as onerous as I thought it would be, I was still nervous about the mint. I had imagined it would be like drinking mint choc chip ice cream which, while amazing is a bit much. Yes, I have drunk mint choc chip ice cream and the shots of the same name. That doesn’t mean it’s healthy or good 😉 So I shook and poured myself a lovely glass of this chocolate milk (in a champagne glass since we didn’t have any other small glasses I could find quickly) and tried it. Here the mint was absolutely front and centre. Not a green fresh mint but absolutely the mint of a mint choc chip ice cream however it wasn’t as sweet or cloying as I was worried it would be.

Overall a sweet chocolate milk in a very cute can with an adorable logo I think everyone is going to dig. This is absolutely best chilled and you for sure need to shake it. As every kid knows, chocolate milk tastes better frothed – especially by using a straw and blowing bubbles into it 😉