Cornish Scones Recipe from Rodda’s – With their Butter & Clotted Cream 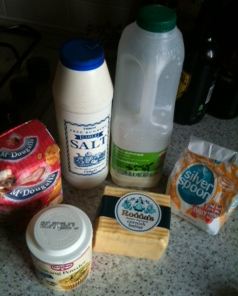 Since it has been awhile since I baked anything, and since the lovely people at Rodda’s sent me butter and clotted cream, I decided to make some scones. They have a recipe on their site but I changed it a little bit and so am posting here how I did it but you can check out the original recipe HERE. You’ll see it is mostly the same but I changed the way I attacked making the pastry dough a bit 🙂

I should mention – my husband, who is not a connoisseur of food by any means and of whom I sometimes despair of ever educating, could immediately tell the difference in the butter and clotted cream from Rodda’s and sort of claimed them for his own. I think that if someone like my husband could tell the difference (he is a part Devon boy as spent a lot of time there but considers himself Welsh), then you will too. It is worth it to choose Rodda’s because there genuinely is a difference. 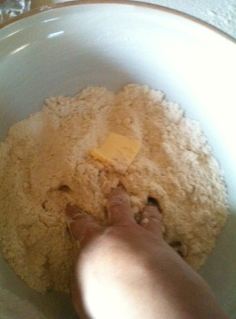 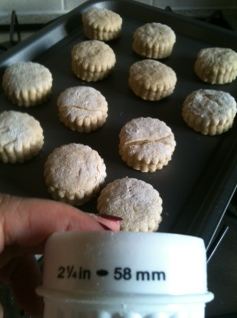 Now, take the chopped butter and mix it well into the flour mix, combining the butter in until it is well combined. Or at least that’s what I did 🙂

Now add the milk to the mixture and once it is a proper dough stretch it and knead it until it is a nice smooth dough.

Now, sift the extra flour you held back into a clean surface and roll it out into a thick slab of around 2.5cm thick because they don’t rise much in the oven 🙂

Use a 58mm cutter and you will get 12 scones out of your mix. 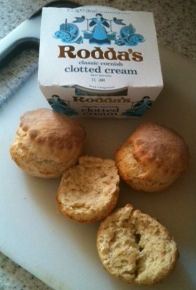 How to Eat Scones Properly (especially at Afternoon Tea a.k.a. High Tea)

There is a method to properly eating scones I have discovered. The interesting thing is, it apparently reveals which part of the country you hail from. Having no such upbringing, and not really ever having had scones and clotted cream before coming to the UK, I took an engineering approach to the problem. The solution, I felt, to piling 2 almost-liquids on top of a solid was to first use the more structured of the 2 in order to create a level surface with a wall structure, Then place the second almost-liquid within and bowl created by the first – thus clotted cream first, jam second. Apparently this is also the Devonian way. 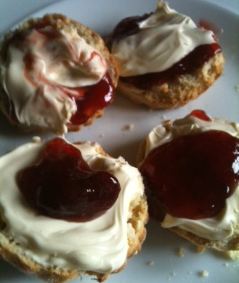 The Cornish way is to place the jam on first and the clotted cream on second. For me this presents the problem of not being able to see the whereabouts of the jam and given it moves more than the clotted cream, it could slide off more.

The outcome of the experiment was that the Cornish methodology resulted in less jam consumed but it was stable. Less jam because I couldn’t get more on safely. The Devonian way resulted in more jam but had a propensite to dribble due to the increased amount of everything I put on the scones.

You should try it for yourself and decide 😉