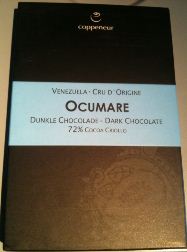 It was on a whim when I was in a giddy mood that I bought this chocolate. I was literally a girl in a chocolate shop and I was surrounded by chocolate from all over the world. The place was San Francisco and it was just a day past my birthday and I knew I deserved something special. I took my time, investigating each and every bar, taking my time to choose. I selected carefully, tweeting as I went, following both heart and mind and this was one of the bars I chose. This bar with the strange name and the silver seal on the closure. This mystical bar of chocolate.

I opened the package and discovered the dark bar. It is a delicious smelling slab of 50g of dark chocolate. It does not reveal the extremely intricate flavours. This bar has a secret and the secret is in the flavour. One thing you can’t know is how it will taste. Too many bars smell delicious and taste awful so I had to brace myself. 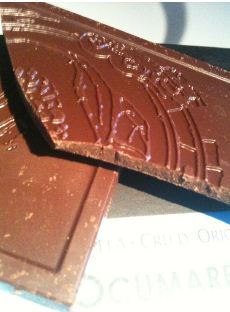 Raisins, almonds, cherries and an almost marzipan flavour bursts out from a slightly gritty chocolate. This chocolate is different with a bold intensity that aggressively assaults your taste buds and floods your mouth with the taste of ripe red fruits as it melts. The grittiness tells me they conched less to retain more flavour. The aggressive fruit sits over a dark chocolate that smells of the earth it was grown in. The delicious flavour of the chocolate lingers with an almost nutty edge to the flavour. This is a bar to wake you up and make you feel like you ate a whole slice of fruit cake!

This is a really different chocolate bar from others. With a strongly red berry fruit explosion and almond marzipan flavour from the beans themselves, this could easily be a flavoured bar and anyone who I share it with thinks it is, but the flavour is completely and purely bean-based. Genius.