I had the great fortune of finally meeting the folks behind the UK Zotter personality I had been communicating with on Twiter.  Zotter is a crazy fun company with wacky ways of approaching chocolate.  They have hand scooped bars, crazy flavours and fun artwork.

One of their offerings is the hot chocolate.  They have several different flavours and I walked away with five.  Five is an odd number when you think about it and they do have six in a box but I was special and they gave me one of each flavour they had and I’ve tried three.  Now, before you get upset, consider that I have had 3 already, among others, and think about how much I have sacrificed for my blog.  I have had enough chocolate and hot chocolate to make most people sick and yet I continue to selflessly eat and blog 😀

So I chose three different flavours.  Well, when I say I chose I suppose I should say rather that fate and artwork chose for me.  First I thought the puppies were cute.  Then I randomly grabbed one and then I thought the squirrel was cute.  So there you have my keen educated palette up against puppies, a squirrel and the fickle hand of fate.  But come on!  Who can resist puppies?!? 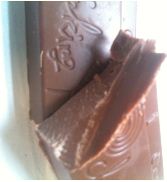 I cut the chocolate up so it would melt more readily and it seemed to be fine. The melt was very fast, the hot chocolate was delicious and it was super easy to make.  Not like drinking a bar of chocolate but like a sweet, milky hot chocolate.  I’d probably use more milk and 2 bars 🙂

Lastly I tried the squirrel nut hot chocolate.  I think of the three this is the most like a chocolate.  I was a bit sad, however, that of the three this one was exactly like a praline chocolate and readers of this blog will know that I’m not the world’s biggest fan of pralines.  It is, however, just like drinking a liquid praline chocolate and I know that a lot of people love pralines.  You can curl up with a hot mug of pralines and drink a warm cup of yummy cuddles on a cold day.  What more can you ask for in a mug of hot chocolate (if you’re a praline lover)?

So all in all the hot chocolates I tried were yummy and will appeal directly to people who like that particular type of chocolate – milk, white or praline. They are brilliantly suited to the chocolate on the wrapper 🙂