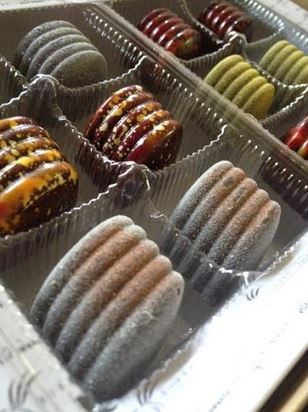 I was so excited to be gifted this chocolate. With Wild Sweets making their own chocolate from bean to bar I really wanted to see their chocolate shine. Sadly there were no plain, unflavoured ganaches in the box which I wished for so I could try the ganache on its own but I’m sure there is a reason…

Nature: Single origin ganache, almond praline & vanilla nougatine. It was OK. I think the chocolate probably could have stood on its own without all the added gubbins and frankly I would have relished to taste what seems like an AMAZING ganache standing on its own. I felt the inclusions were delicious and high quality but I’d love to try a naked ganache. That would be awesome!

Caramel: Caramel ganache, coconut nougatine & crispy praline – probably my least favourite one – I didn’t like the coconut because I don’t like coconut 😉 but overall the flavours are balanced well and I appreciated the crispiness.  I think as a coconut chocolate it isn’t terrible and so coconut lovers are going to appreciate the flavour.

Framboise: Raspberry ganache, almond nougatine & raspberry jelly – I think again I would have preferred it without the almond. The chocolate is absolutely amazing against the raspberry and so enhancing this with just a plain ganache and the raspberry jelly would have sent me into a tizzy. Probably worthy of its own box of 12 too 😉 Masterful!

Noisette: Hazelnut ganache & crunchy hazelnut praline feuillete – I’m not a praline fan so I could have done without this one but I know many are so I understand why this is in here.  It isn’t a traditional praline though and the use of the chocolate to offset the nuttiness was an awesome effort. Not my favourite (obvs) but a nice chocolate.

Café: Coffee ganache, anise coffee nougatine & almond praline – this has a weird aftertaste as well as an intense coffee hit but a weird mouth feel because of the almond. Not sure of the reasoning behind the almond in everything but I think again this could have stood better alone. I think that as a plain coffee ganache with the chocolate it would have been an amazing chocolate – possibly again warranting its own box of 12 for coffee lovers or perhaps investigating different origin and roasts of coffee with the chocolate. 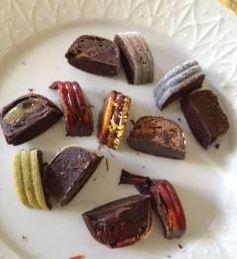 Overall I’d love to see some tweaks but I guess these have been developed using customer feedback and they are certainly unique flavour and texture combinations. I’ve come to feel the people in BC have weird taste but as a native Torontonian, this does not surprise me 😉

You can buy some online if you are in Canada or pop by their shop in BC.