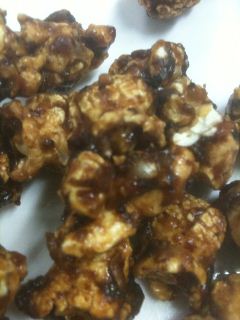 I’m a fan of popcorn.  As some of you may have witnessed by my trial to get someone to be my Black Jewell popcorn mule from the US to Canada for the TorCon III WorldCon, I’m a big fan of popcorn demonstrating flavour, texture and something different.  Comes from reviewing so much food 🙂

Given that fandom of the pure, unadulterated flavour of popcorn, you’d be unsurprised to find I am not a fan of sweet popcorn.  This style tends to have been created with a somewhat pathetic hint of some melted white sugar pathetic nothingness, adding absolutely nothing but calories to already flavourless bulk popcorn.  Bleck.

Unsurprisingly, I also rarely review flavoured popcorn.  What is often a lame attempt at tarting up an already bland confection often ends in something resembling a spice cupboard explosion with only a few notable exceptions.  So it was with a degree of scepticism that I tried some flavoured popcorn at the Joe & Seph’s booth at Speciality Food.  I figured I could smile politely and walk away having said a few encouraging words and just forget it.

Joe & Seph’s made it impossible to forget.  That first bite exploded on my palette and immersed my every tastebud in a differing sensation of flavour.  How could I after that first taste walk away, let alone not come back for more. So I agreed to review the popcorn and set about the difficult task of selecting a flavour.  Abandoning that as a lost cause, I checked their site and saw the recommended minimum purchase was 3 bags. I could narrow my focus to three with some difficulty and so I did – three flavours of the season…

Mince Pie – it’s like the filling without the wheat pastry. If you’re allergic to wheat like me (it won’t kill me but I’ll be unwell) then this is the answer to your mince pie cravings. There is just a tiny bit of dried fruit on some of the popped kernels and the flavour of the sugary coating which envelops most of the popped kernel is exactly the flavour of the inside of a mince pie with those complex spices melding with the dried fruit to create a flavour you’ll find nowhere else. 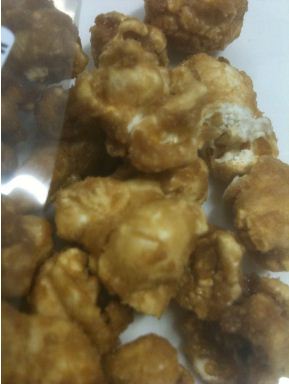 Macchiato Whisky – These kernels were again coated completely with the custom-made sugary coating.  This was a weird combination of coffee, sweet flavouring like a light brown sugar and whisky. This particular sample bag had a different texture – almost like crumbly brown sugar on the tongue but with a bit of something dusky at the end. This was delightful and the constantly shifting flavours in the mix made it even more fun to eat! 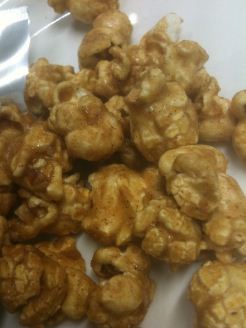 Toffee Apple Cinnamon – I can’t imagine how anyone could possibly not love this flavour. This was like apple pie in a popcorn. It had that dusty cinnamon with lush crisp apple flavour and sweetness and crunch of a toffee apple.  Of them all this was my favourite. The coating was complete, the flavours mixed well, unlike with the macchiato whisky where they constantly shifted and changed.  This is apple pie in a coated popcord (and thus without the wheat).

I don’t know if this is suitable for coeliacs but it doesn’t mention wheat on the label and it doesn’t seem to have set my allergies off so I heartily recommend investing in some for the holidays and let the wheat intolerant among your guests enjoy a bit of delicious dessert.