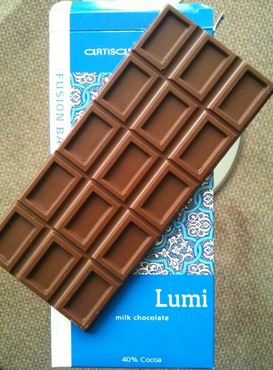 With 40% cocoa and a promise of dark and deeply scented ripe limes, this bar in its decorated box reminiscent of Middle Eastern art, the first ingredient of “cane sugar” did worry me somewhat. As a person who likes to let chocolate melt in their mouth and savour the flavour of the beans, I always knew that this wasn’t going to happen with the Artisan Chocolat bars (but one can hope)

The chocolate itself is smooth and creamy – it is a delicious milk chocolate which is rich, creamy and delicious. The darker hint of molassas here may be from the delightful cane sugar and the chocolate is a standard good quality milk. There is nothing in this chocolate which disappoints except maybe the lack of the flavour of the lime.

The lime is absolutely here but it doesn’t make itself immediately known. As a volatile top note, it is difficult to detect but once you have identified it as that odd flavour you keep tasting then you realise that it is there like a haunted image in a photo – there and obvious and yet difficult to discern.

All in all it is a pleasant, if somewhat slightly odd flavour to the chocolate from the Lumi lime.