That’s right – Toblerone (a favourite in my fondue pot to be sure) has launched a new website and they are giving away prizes including a 4.5kg bar of Toblerone! 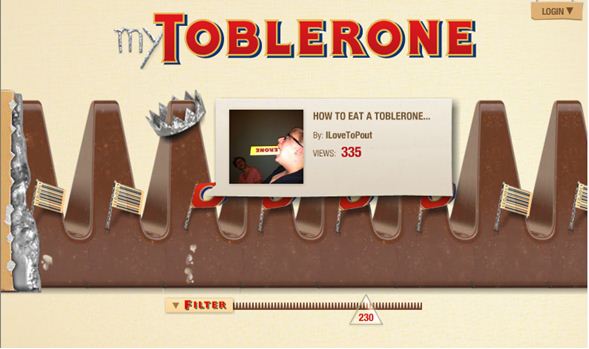 It’s actually a really cute site and it looks loads of fun. I love the way each entry is a triangle on the bar.

One of the best things I think is the press release I got which had some of the best, most hilarious illustrations on it including the suggestion in line drawing of how to break a Toblerone triangle off using a spiked fence post!

Go on – give it a try and add something to the site.

In fact, add a comment about your favourite thing to do with Toblerone, a memory or something else Swiss/Toblerone-y here too and I’ll give one lucky random commenter a bar (smaller than 4.5kg I’m afraid) I’ll choose a winner after going shopping on Saturday May 7th 🙂
As usual this is for the UK only, this is just a blog so there is no cash alternative, I use Randon.org to pick, my decision is final, this Toblerone will probably from Sainsbury’s 🙂

129 Responses to Win Toblerone With My Toblerone or Us! [closed]