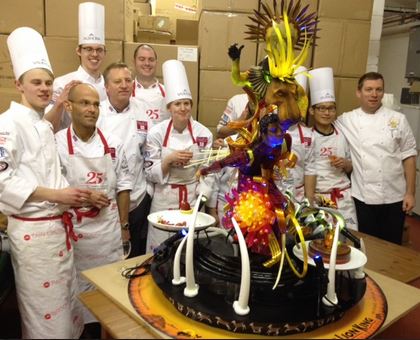 It all started with an ice sculpture. We were greeted at the entrance to the training ground by an ice sculpture of Rafiki and from there on in we knew the secret that had been kept from us and they we had been sworn to secrecy over – Team GB (as we were calling them – officially Team UK) were heading to Lyon to compete in the Coupe de Monde on the theme of the Lion King the stage play at the Lyceum Theatre in London.

The Coupe du Monde de la Patisserie is something relatively new but which is attended by thousands where many people compete to be the best in the world in pastry. The concept: bring together 22 young pastry chefs around the world, among the most promising of their generation, and let them make unique desserts and real ephemeral works of art in 10 hours before an enthusiastic audience. A jury of the most famous pastry chefs then decide who is the winner.

You must make something from ice, something from chocolate and something from sugar with most entrants making very complex pieces. As you will see in the UK entry, ours was extremely involved and intricate and when I attended they worked for over 13h to exhaustion to complete the trial run. In addition to the sculpture you had to make a plated dessert, a cake and a frozen dessert. All of these things test the skill of the patissier and bring different skills to the fore.

The UK team’s plated dessert was an amazing chocolate mousse in an oval shape, filled with raspberry coulis. The pulled sugar arc was also tasty as was every mouthful of the dessert. The cake was chocolate mousse with mango and my goodness an amazing layered filling. Look at the Stellar book for the dessert section. Even the inside of the ice cream cake was amazing with fantastic flavours as well as stunning designs.

Overall I wish they had come 3rd or even 1st as apparently France win it every year they compete but I hope therefore in 4 years’ time team GB (the UK Pastry Team) kick butt!