This bar was one of the ones I got in the bag as one of the Academy of Chocolates award winners. They are a bean to bar company who don’t own all their own equipment/factory and so have to rely on others to perform parts of the process.

This is a 72% chocolate which has had a 48h conch making it very smooth. On their website they say “For this we select for only the best chocolate beans quality-conscious small businesses in the famous region of “Sur-Del-Lago,” north of the university city of Merida in Venezuela.” 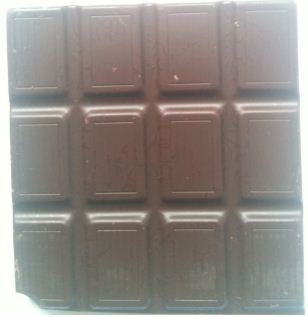 The wrapper on this bar is beautiful but I had trouble at first figuring out who was the manufacturer. I actually like it – the plain white wrapper with the brown printing. It reminds me of the chocolate my husband’s parents brought me back from Spain where they only sell it locally and it is all different shapes 🙂 This says it is “Swiss made” chocolate which I believe related to the factory location but I can’t be sure from the site.

There is a slight peanut-y flavour to this in the background, but just a hint. There is, however a delicious rich and earthy flavour to the chocolate. The melt is smooth and clean. The flavour is rich and like a well-cooked brownie. This is a deep and strongly flavoured chocolate with a distinct flavour that hangs around in your mouth. I think I get raisins at the end actually or maybe prunes. It could be both. As the rich thick chocolate flavour passes, there are a host of other flavours that were hidden by the chocolate come through.

I really like this chocolate and I would love to make it into a brownie as I think it would lend its lush flavour to the baking.