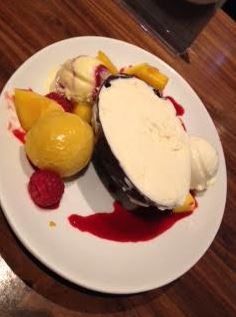 I’m a chocolate lover and that means Easter is my most favourite time of the year. Well, when I got invited by Haagen Dazs to review their Easter special I jumped at it. I then tried to invite some blogger friends. You’d think it’d be easy but stupid phone batteries meant I was sitting by myself on a table for 3 🙁

Setting aside my lonely disappointment, I ordered for myself a single Easter Egg Special ice cream treat at Haagen Dazs in Leicester Square. A chocolate egg shell filled to the brim with vanilla ice cream with three scoops of ice cream in mango, raspberry ripple and vanilla with pieces of fruit. Surely that makes it healthy..? 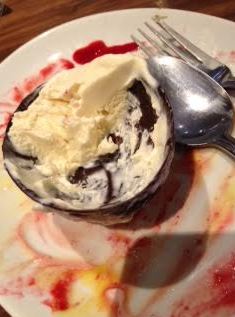 My yolk was knocked off so you don’t quite get the full Easter effect but trust me, the picture made it look perfectly Easter-y. I started in by picking off the weaker ice creams in the herd – singling them out and scarfing them down. Once I had defeated them, I started in on the egg.

The egg was not easily defeated though. I tried to break through its tough exterior but it was just too much. I tried with two utensils and still it refused to be broken. 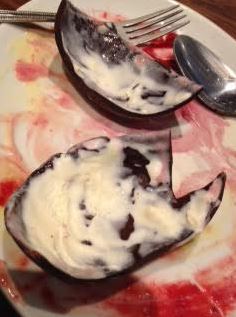 Finally, I turned the empty egg shell over and aggressively beat at it until it broke – VICTORY! The chocolate wasn’t bad – dark chocolate that would have been balanced off nicely with the vanilla ice cream if I hadn’t eaten it all first *whoops*

Overall, it is a *lot* of ice cream and no chocolate ice cream but a very satisfying amount. It is so much, you might want to consider sharing. Then again, you might choose to do what I did and have it alone (although that wasn’t by choice 🙁 ) 😉