Have you ever had one of those moments where you were either elated by the flavour of something you are or so reviled by it you thought you’d never put anything in there ever again and would just be fed intravenously to avoid that horror ever again?  While my reaction to white chocolate isn’t nearly that bad I do find that most white chocolate has an overabundance of vanilla and while I do bake with it, I’m not a vanilla fan.  Mom is, gran was when she was alive but I’ve just not yet developed that love.

So when I have to review white chocolate I always hope for the best and usually things aren’t all that bad.  I do find Green & Blacks a bit on the vanilla side for me but others have been the same so really it’s all par for the course.  So when I got the huge load of Seed & Bean chocolate I immediately sorted into white, milk & dark and found only one white – YAY!

White chocolate isn’t quite chocolate being made from cocoa butter which has come from the manufacturing process of making chocolate but has no solids – just the butter.  Generally this has all trace of chocolate removed and it is called deodorised.  I’ve had a chocolate which had non-deodorised cocoa butter added and it was distinct and muddled the flavour of the bar.  This is also more valuable to the cosmetics industry and so only small chocolate manufacturers keep the cocoa butter – larger ones sell most of it on. 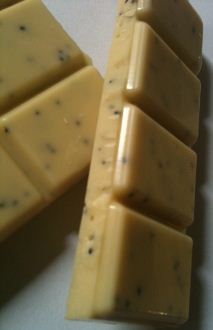 I’m a big poppy seed fan – on bagels.  Maybe it is the drug addict in me (well, since I’m not addicted to anything but maybe chocolate I suppose that is a bit of an exaggeration) but I like them – I like their crunchiness and when you bite one it has a flavour that isn’t unpleasant.  I also love lemon.  It’s a delightful flavour and can really cut through a number of flavours and as a top note really announces itself to the world.  So there are 2 things here that I really enjoy in a chocolate that I’m not super keen on but this could change things…

The white chocolate itself has a fast, clean melt with only a slight after taste.  The usual extreme sweetness of most white chocolates here is tempered.

Would I buy this one?  Probably for a friend who likes white chocolate.  I’m a fan of the red berried dark chocolate and so for me this just doesn’t hit the right note but it could for you.  If you’re a white chocolate fan why not try it?