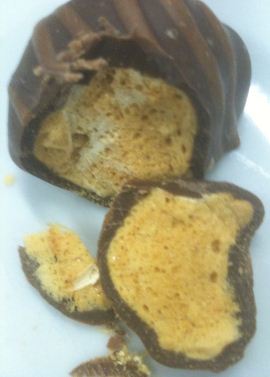 This was something a bit different.  Chilli and chocolate is a Mayan tradition (of sorts – or so we are led to believe but they also didn’t refine or conch their beans like we do, let alone temper them so…) but to add honeycomb to the mix was something new.

I always use sugar to calm chilli when I add too much.  It is a way to take some of the heat out of the chilli so I was intrigued about this chocolate covered honeycomb with a chilli kick.  The flavours, I thought, would war in your mouth for supremacy and it would end up muddled.

Wow – this was an immediate & instant office hit! I’ve had a lot of honeycomb/sponge toffee/hokey pokey of late & I’m a bit picky. The Chocolate Society stuff never made it to the office 😉 but it is the holidays so as I attempt to get on top of things I’m sharing. 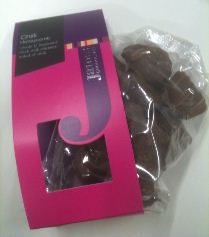 These look innocent enough to start with – thick milk chocolate covering a chunk of honeycomb with a drizzle of lighter chocolate on it – it isn’t until you bite in to one that everything changes. The chilli is an immediate kick to the teeth (see what I did there) that is until the honeycomb dissolves in your mouth and calms the extreme chilli down.

The flavours are quite intense with the chilli an immediate and pervasive flavour through the chocolate. The honeycomb is nice and sweet and as you hit it and it begins to dissolve in your mouth the chilli starts to calm but not go.  The flavours compliment and don’t war.

This bag was pounced on in the office and gobbled up – it was a real favourite!  I think this is an absolute winning combination and one I know has some already ordering more 🙂