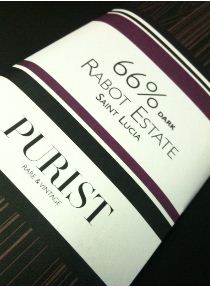 [updated with corrected information] The Rabot Estate that Hotel Chocolate runs is a chocolate success story.  Taking trees of varying strains and creating a new one, Hotel Chocolat have really tried hard to not only create excellence in mass market chocolate, (apparently not – they aren’t trying to improve the strain through cross-breeding – just selectively breeding trinitario). It’s obviously a labour of love for all involved, including Angus who helped found Hotel Chocolat and still attends many chocolate events.

This bar is an interesting one.  66% keeps it slightly sweeter and less overpowering than other bars and it has a moderately fast melt but it also stops people who are intimidated by the ‘dark’ from avoiding this bar. Too many consumers currently relate 70% to bitter, burned chocolate beans and the awful chocolate created from them whereas in reality something like a Hotel Chocolat 70%,  Duffy’s 72%, a Soma 70% and others  can be an absolute joy.

This 66% from the Rabot Estate, however, is more than just a bar to help those afraid of the dark ‘cross over’. This bar showcases the work HC have done in creating their single type of cocoa beans. This is a unique bar and a unique opportunity to taste something new and I was excited to give it a whirl. I was willing to abandon my beloved red fruits and acid for something different. What would it be like? Would it be Hershey’s or something new? What had they created – Frankenstein? 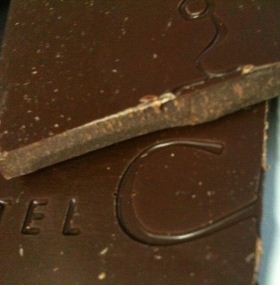 Well, this isn’t really too far off what I enjoy in a flavour profile.  You’ve got this initial blast of figs as you both open the bar and place the first piece in your mouth.  As you let it melt on your tongue (quickly – not as fast as Duffys but not as reluctantly as others) you then a gently roasted chocolate flavour coming through then mellowing into something with a tinge of raisins.

All in all this cocoa tree strain has produced some fine and unique beans that Hotel Chocolate has sympathetically treated. They have created a delicious dark chocolate that would balance well with a nice deep red wine, probably a syrah.  I’d say, give it a try if you’re ordering chocolate online from them – or in a shop 😀

The genotype of the cocoa on Rabot Estate is Trinitario, this has been proven by a detailed DNA analysis carried out by experts at Reading University Plant Science Division.
This cocoa has been traced back to the original ICS 100 selection, defined as the 100 best Trinitarios by an expert named Mr Pound in the 1930s
During the course of our research during the last 6 years, we have been identifying the key taste attributes for each genotype of Trinitario and the key influence of the “Terrior” which Rabot Estate has 16 named areas or “Cotes”

We select the very best cocoa trees to give the potential “tasting notes” that Angus and his team of chocolatiers require.
Obviously, there are a lot of stages, from Harvesting just at the right time, the fermentation and drying process that all have an effect on the beans potential, lastly, the skills of the chocolatiers to release the inherent “flavour profile” of the seasons beans.

Due to being one of the few chocolate companies to be in control of the “Tree to Bean” has allowed us to gain the knowledge to develop our cocoa genebank.

The selected cocoa trees by genotype, are “grafted” using bud-wood from the doner tree onto a suitable root-stock seedling.
This is the same method as used by fruit tree growers.
Thereafter, the grafted tree will be a complete replica of the doner tree.

These grafted trees can be commonly called “clones” but the word is misleading.
There is no genetical engineering at all, simply a graft from a doner tree.

Our nursery programme is to reproduce the very best cocoa trees and to save these genotype of Trinitarios for future generations.
Also, to re-plant the Rabot Estate and supply the 100s of local farmer growers who have joined our scheme.

It maybe in the future, once our research is at a stage to allow, then we might consider developing new hibrids of Trinitario, but not yet.

Thank you to Philip Buckley Estates Director and Country Head in St Lucia for Hotel Chocolat who corrected my mis-understanding of what I had read about the selective breeding program so I could correct this post.