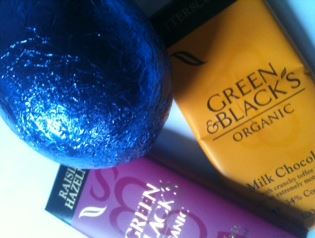 In possibly the fastest movement I have ever seen out of my husband, when he saw the Green & Black’s egg come out of the box he dashed to it and said “mine”. Well, that was me told. After as light tousle where I explained he’d have to sacrifice part of the egg, I managed to emerge with both the chocolate bars that come with the egg and a piece of the egg itself.

This is the passion and desire the mere mention of Green & Black’s evokes in many people. Founded by Craig Sams on ethical principles, it turned mass manufacture on its head a bit. Larger cocoa companies couldn’t believe that it could be done the way G&B were doing it at scale and yet once they saw the process in action, they were converted. 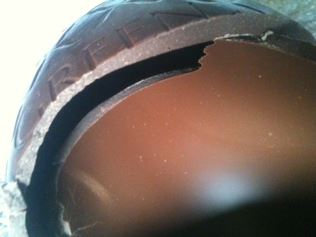 As you can see, the egg is relatively thick and, so that your egg doesn’t get mixed up with anyone else’s, it is stamped as Green & Black’s. The milk chocolate is going to be a crowd pleaser, being their standard milk and with it being marketed as organic and Fairtrade it’ll be a popular choice this Easter.

There is no plastic used in the packaging of this egg, continuing the green theme. The chocolate is Fairtrade and the company was founded on a strong set of ethics. With these eggs being made in Britain, why not support British made eco-eggs this year and choose a household name in Green & Black’s.