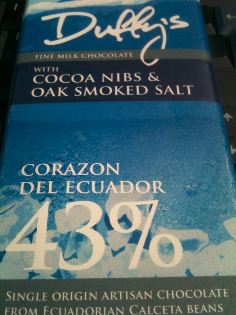 Duffy, as readers of this blog will know, is a race car mechanic. He tours the circuits by weekend and in the week works at the factory – both the car factory and chocolate factory. He also works with some of the best minds in the chocolate business – people who really know their stuff when it comes to roasting, refining, conching and making top notch chocolate.

I’m not a huge fan of smoke as the folks at the Scotch Malt Whisky Society will attest to. I like my chocolate, as I like my whisky – bold, fruity, slightly sweet and without any smoke. So yes, it somewhat beggars belief that I bought a bar that included smoked sea salt. Call me a glutton for punishment or just experimental. That and it is a milk chocolate. I’m just weird 😉 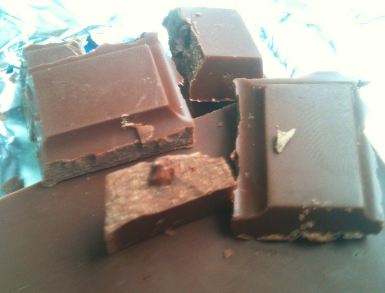 The taste was… odd. It was like having a small hint of whisky in there. That oak smoked sea salt was there in the foreground all through my nose for the whole time I was tasting it. I did detect some red berries under it but mainly I think that was because I had the cocoa nibs at the end. Quite an interesting smoked flavour. It doesn’t pervade the chocolate as you’d get from having smoked the beans and instead you get it as a separate flavour that comes through but is also not the only flavour. Those lush flavours of the underlying chocolate are both preserved by only smoking the salt and from adding the cocoa nibs. Interestingly this is smooth despite being a milk chocolate, leading me to believe the Star of Peru may just be less refined/conched and thus the particle size is simply larger, enabling me to feel it as it melted.

I won’t lie, this is a bar only a smoke fan is likely to love but a non-smoke fan will like it and I think in that sense it has broken out of my own restricted zone of hating smoke and straddles the line between flavour and smoke. All in al it is more a smoke lovers bar but those of us who aren’t smoke fans will find something in there to enjoy as well.