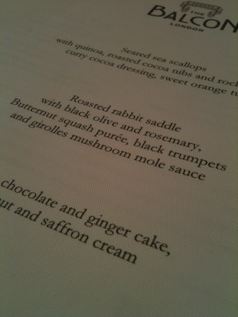 Chocolate Week has not yet ended with Le Balcon and La Maison du Chocolat. Their gorgeous menu of chocolate dishes is both reasonably priced and paired with some of the best wines. Depending on your tasted you can choose with the fixed price, fixed menu a white with the starter, a red with the main and a dessert wine at the end and relax as each course is brought or go for a lunch and choose the red (in my opinion). 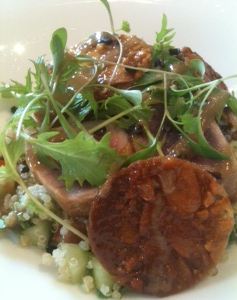 The menu, while fixed, can be altered to accommodate allergies. For example, my shellfish allergy was expertly handled with seared tuna cubes, expertly marinated and cubed to be cooked to just the right level that the lovely deep red tuna was still there but it was also clearly seared. Placed on a bed of quinoia and rocket, it was absolutely delightful. The chocolate in the dressing was perfectly balanced to my palate and the sweet of the mendicants was absolutely masterful. 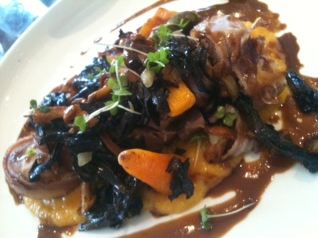 The rabbit, for me, was perfectly done. My rabbit was so huge and wrapped in thin slices of ham and surrounded by bacon. It was so large though it could have been for two people. The rabbit had less flavour than I had feared and so was absolutely perfect for me. The red wine balanced perfectly against the meat. It was not what I was expecting for the price. The vegetables were delightful and the mole sauce did compliment the rabbit just perfectly. I wish I had more of the mole for the rabbit. 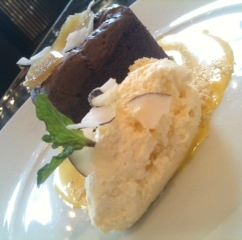 The dessert, for a non-coconut lover was fine. Despite saying there was coconut with it, they put *real* coconut shavings from a *fresh* coconut on the melting pudding, meaning removal of the real slices of ginger and large slices of coconut was easy, though also meaning a coconut lover was going to have died and gone to heaven.  The chocolate melting pudding was perfectly balanced between ginger and chocolate. I might have wished for a pure chocolate pudding but I think after the heavy rabbit it was actually the better choice for everyone 😉

The meal was finished off with a pair of chocolates and an invitation to experience a chocolate tasting in the shop itself. Since I’m in there almost regularly I donated that to my boss. Now for the surprising part of the menu – the price. In a fancy restaurant on the Strand, I expected that this meal, which is designed to be dwelt over and not rushed, to be upwards of £50. The fixed menu for chocolate week, without wine, was only £35 per person.  That is extremely reasonable for a dinner you can enjoy and linger over while watching the life around the Strand wander by.

I do recommend this as a value for money meal as well as a delicious meal with choices you may not normally make. I was pleasantly surprised when I saw the price and I hope some of you will take advantage before it ends on October 23rd.