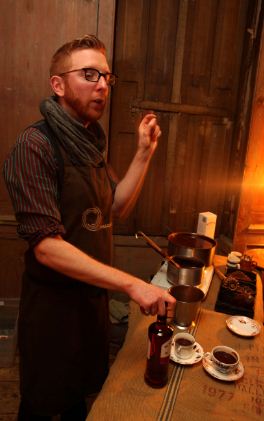 I was lucky enough to be invited to a whisky event. Now, often whisky and women are not associated. Whisky is seen as a drink aimed at men and I have to admit, the extremely peaty ones I’m happy to let someone else drink but I am someone who appreciates flavours and experiences and this evening with Bowmore whisky was a real experience.

We were met by actors and given a whisky cocktail as this was meant to be an immersive experience. Unfortunately for my aging joints, this experience involved a lot of stairs however it was worth it for everyone I’m sure.  We were split into groups and went in those groups around the experiences.

My group went upstairs first and experienced the magic of the night sky over the Bowmore distillery. The darkness there is almost absolute and not far from there is an observatory. This observatory is where some astronomers took the imagery from the Hubble telescope and created an amazing 3D movie of one square millimetre of the night sky which was absolutely crammed with galaxies – and our ability to see them is only hampered by the age of our universe as we have to wait for the light to reach us.

We then went and were told a story where the headless horseman turned out to be just a guy in a cloak huddled against a storm. After there, we went into a holding room before trying some of Paul A Young’s amazing hot chocolate. I think they likely won over new fans that night. 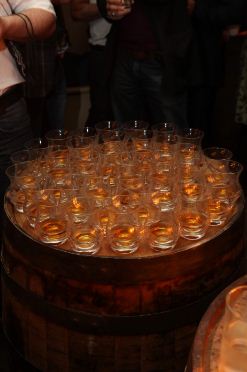 Finally we tried some 12 year old and 15 year old whisky.  Now I know from my other whisky events that the age is actually the age of the youngest whisky in the blend and that even a single malt is a blend. Only a single cask whisky is a single age. Most single malts are multiple ages blended together. The 12 year old was not too peaty and wasn’t too bad at all. Not too strongly flavoured, nicely balanced but the 15 year old was like Christmas – toffee and treacle and fruits and so much more but with smoke.

Of all the peaty whiskies I have had, I have to say I really enjoyed the Bowmore. The nose was just amazingly sweet and fruity. It was really surprising as an Islay whisky.