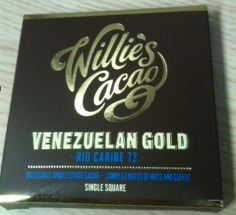 I don’t often re-review chocolate bit in the case of Willie, he’s changed a few things, including the box and bar size, and so I thought since I had received a bar as a gift that I’d give it a try.

Willie Harcourt-Cooze became a bit f a celebrity as a result of being on a series about his family, his farm in Venezuela and his factory in Devon. He is extremely passionate about chocolate and is extremely knowledgeable about chocolate growing, manufacturing and all the nuances in-between. He’s also quite charmingly opinionated about what makes good chocolate. 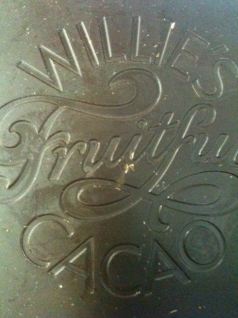 I received this bar of Willie’s ‘Fruitful’ Cacao in the goodie bag from Kennedy’s Confectionary Conference. An excellent conference for those who are serious about the confectionary business but likely dull as dishwater if you aren’t interested in the global numbers for units of something sold over a 3 year period, broken down by market and sub-region. If you are a chocolatier, chocolate maker, fudge-maker, patissier, or other serious food producer in the sweeter end of things, check out the Kennedy’s Confectionary publication.

For this bar, I’m re-reviewing it under the same conditions as I reviewed the original bar as much as possible to better understand how it has changed. Immediately I notice a big difference – this is a 50g single square bar rather than 2 thinner bars. This makes it slightly more challenging to break off a small piece but means any piece lasts longer. 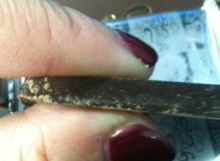 I get a note of nuts and as it melts I absolutely get intense nuttiness. There is an undertone of coffee which to me makes me think of bitter chocolate or over roasting but it isn’t too bitter. There is little in the way of fruit or acidity for me but the nuttiness is not unpleasant. There is little drying at the end, marking this as a not at all bitter chocolate but those coffee notes are going to satisfy the craving for bitter I know some of my readers have without your mouth feeling like the Sahara afterwards. The chocolate finishes pretty cleanly – it is off my palate pretty quickly after I finish my first piece, making me crave more. The mouth feel is very smooth, with the particle size smaller than I remember from the last time I received some of the chocolate.

Overall, this was a good re-review. I love fruity Venezuelan chocolate but this nutty and coffee flavour to the bean chocolate is also really great for lovers of that profile. I have broken my rule about chocolate and made this my handbag chocolate. I just wish it was easier to bread off small pieces (no I don’t…. except when I have to share!)