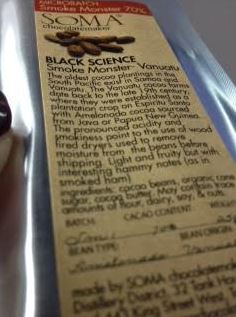 As many of you know I love Soma. You might also know I don’t like smoke whether in whisky or chocolate. While I realise that smoky/peaty whisky is a desirable and complex tipple, smoke in chocolate for me denotes a foreign tasting note introduced as a result of the drying process.

In some countries the ambient environment is too damp to dry the beans properly in. If left to dry on their own as in some countries, the beans would rot from the high moisture content in the air. In these countries, it is imperative to use an artificial dry heat to dry the beans fully before shipping and this is where the smoke is introduced. Chocolate will absorb the flavours of anything around it including rubber as I discovered with some SchaffenBerger chocolate in their San Francisco shop where one of their bars or beans had clearly been stored near black rubber. Yuck!

Despite this, smoke is a desirable flavour note in chocolate sourced from Papua New Guinea. People now specifically look for PNG (Papua New Guinea) chocolate because of these smoke notes which bury some of the glorious fruity notes I feel.

Vanuatu is a small chain of islands off the east coast of Australia, southeast of PNG. It is quite a significant distance from either of these large land masses so I can only imagine the journey the cacao has to make. It was apparently once called “New Hebrides” but now are a republic. The area in the south pacific they are in is definitely a tourist destination but maybe not for chocolate yet 😉 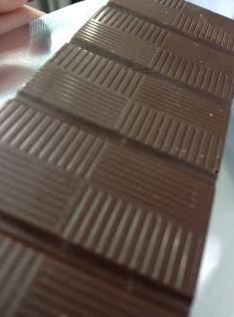 But what about the chocolate? Well, Soma describes this chocolate thusly: “The oldest cocoa plantings in the South Pacific exist in Samoa and Vanuatu. The Vanuatu cocoa farms date back to the late 19th century, where they were established as a plantation crop on Espiritu Santo with Amelonado cocoa sourced from Java or Papua New Guinea. The pronounced acidity and smokiness point to the use of wood fired dryers used to remove moisture from the beans before shipping. Light and fruity but with interesting hammy notes (as in smoked ham).”

Well, on the nose there is way less smoke than I was expecting. I have saved this chocolate for last and perhaps Soma’s specialist wrapper has enabled a mellowing of flavour.

The start of the experience is fruit – purple fruit then a creaminess that makes you almost think of milk chocolate. As it melts those smoky notes start coming to the fore but utterly differently from PNG. You do get that hamminess which surprised me. There is a compliment to the fruit here that does not struggle against the smoke but almost, dare I say it, compliments it. I’m getting a light acidity but nothing like my usual fruity Madagascar or Chuao. Despite the light smoke, this  bar is incredibly complex and delightful, changing and evolving as it melts and the finish leaves chocolate, not smoke, behind.

One for everyone, not just the whisky drinkers I think 😉