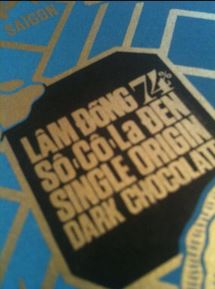 I went to the Marou site to learn a little bit more about chocolate in Vietnam. The cacao from Vietnam seems to have sprung onto the scene from nowhere, suddenly appearing and that just isn’t the way cocoa works. It takes 3 – 5 years for a tree to start producing (less time than a sugar maple) and only then can you *start* making cacao. I was curious about Vietnam and cacao and found this:

“It is said that the famous Doctor Alexandre Yersin, a disciple of Pasteur, discoverer of the bubonic plague bacillus and formidable presence in Indochina from the 1890s to his death in Nha Trang in 1943 tried among many other projects to introduce cacao to Vietnam. Let’s just say this might not have been his most successful enterprise.

“Indeed, a look at the French administration records in the early 20th century reveals that the French were early quitters in the cacao game: by order of the Lieutenant General of the colony the subsidy paid to the local farmers for growing cacao in 1890 was rescinded on January 24, 1907: “It seems, effectively, useless to encourage this culture which has, until now, not yielded any satisfying result”.” 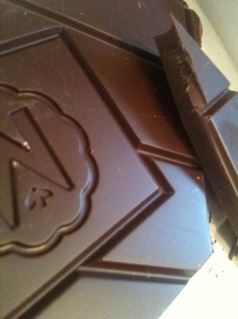 Uh oh – that isn’t looking god. But that was AGES ago – with the subsidy gone, what future was there for cacao and what happened between then and now? How did Marou come to find cacao in Vietnam? Well, there is more to the story but it has a bit of a dramatic end. The USSR had cacao trees planted but the Berlin Wall fell before the trees were ready and the union was dissolving and so they basically cut down the trees.

So that left a few trees and these are part of what makes up the modern cacao crop but what does this particular region taste like? The chocolate starts out with these red berries and an intense dark chocolate fudge flavour. It evolved into a slightly acidic yellow fruit edged baked brownie flavour. Lovely and intense, it is dark and robust without being burnt in flavour. It has an almost coffee edge to it at the end.

Woah – a challenging bar. I’m thinking you need to eat this thoughtfully and with some awareness. It deserves your attention and if you don’t give it your attention, it’s going to just take it. You can buy yourself some of this chocolate from online shop Chocolatiers.co.uk