This set of 4 spreads represents part of the range of spreads that Le Pain Quotidien has to offer but I’m guessing that they are the most popular.  This range of chocolate spreads covers white chocolate, dark chocolate, praline and noisella which is like Nutella.  These are sweet and though they are small they do pack a punch of sugar and most have quite a distinct flavour. 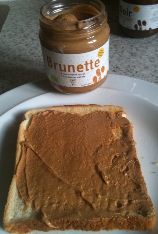 The Brunette praline spread is a lovely sweet hazelnut spread. For those who don’t like chocolate, this is the perfect balance. It is the other half of noisella I guess. I thought it would be too nutty but I was surprised at how sweet it was and how not-nutty it was when I spread it on the bread.  It is still not chocolaty but it is nicely sweet and nutty. 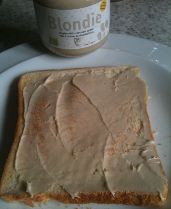 The Blondie white chocolate spread was sweet without much flavour to distinguish it from the other spreads.  It was OK but not the best. I’m sure, though, for people who get migraines from chocolate/cocoa and who don’t like too strong a chocolate flavour this is going to be perfect. 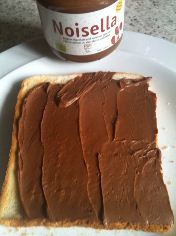 All and all I have to say I’m addicted to the Noir. If it wasn’t for that pesky wheat intolerance I’d eat it every day but it means that when it comes time to select a topping for my special bread treat it’ll be Noir (or maple butter… I *am* Canadian after all 😉 )