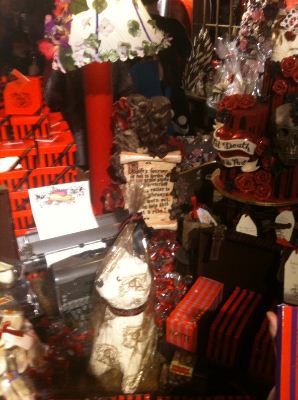 After taste-testing some chocolate spread in the name of science (well… I’d like to believe it was…) I went over to the launch of a new branch of Choccywoccydoodah, riding high on television success.  This new shop in London, extended their physical shop locations from one to two, and was likely made possible not only by the demand for their artistically beautiful cakes but also by their TV fame.

Originally launched in Brighton, Choccywoccydoodah is more of cake shop than a chocolate shop but they do deal in a *lot* of chocolate.  Their designs create visually stunning pieces of artwork and deliver them in cake format. I’m not talking about something where a baker simply uses edible photo paper and prints off a beautiful image – I’m talking about making a sculpture. 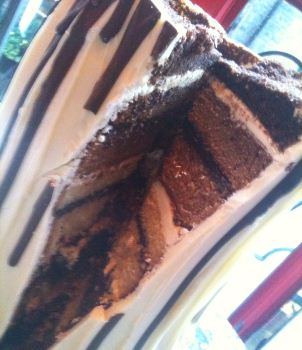 Now, I’ve never seen even a single episode of the TV show because I usually work while watching TV and so really tend to choose programs which do not require my attention. That means shows about cooking, food and ones which require me to actually look at the TV get shunned in favour of Bloomberg.  Mind you, it does mean I’m up-to-date on all the market news but sadly I miss all the fun shows.

Choccywoccydoodah create some wonderful works of art but not just on a single plane or a flat surface. There is cake involved in this sculptural wonder. They have a variety of cakes including chocolate, ginger, coffee and others. All of them have a rather dense makeup and slightly dry texture but when supporting the weight of 5 cakes and chocolate sculpture the cakes themselves have to be firm.  The cakes are held together with a truffle ganache which also prevents slippage as a buttercream  frosting would likely slip too much. This makes the cake slightly drier than it already is as the chocolate ‘icing’ is tacky in the mouth as it is, in fact, a chocolate spread thinly 🙂

The exterior of the cake is why people favour these cakes and just glancing at one through the shop window helps you understand why.  He cakes we were served at the press launch were 5 cakes high – that is they had 5 different flavour cakes in them, They then were covered in chocolate, covered in art and topped.  In the shop below, even more fanciful cakes decorated the shop. Increasingly complex cakes such as the cake covered in flowers are scattered around the shop. For the Goths among the crowd, a wedding cake with 2 skulls greets you upon entry.

There are a number of seemingly impossible cakes in the shop and to top them off are even more beautiful chocolate cake toppers.  Our cakes had marshmallows or chocolate lollipops. The chocolate lollipops were in the shame of lips bearing the message “ear me” or in the shame of flowers. It was quite impressive. In the shop, there were a number of even more impressive cakes, all seemingly aimed at the wedding crowd – and why not. 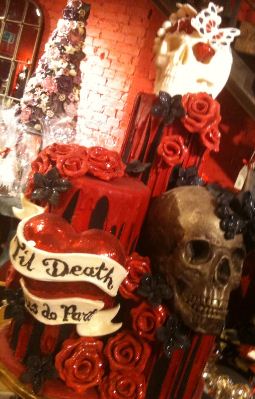 When sculptural elegance is possible in a wedding cake to express the couple’s particular theme or thoughts or hobbies, why not go for something unusual rather than the same old thing.  Not that traditional wedding cakes aren’t great but when you can cut into around a centimetre of thick chocolate shell, why not, right?

The new shop also boasts an upstairs milkshake shop and seating area. The milkshake I had was extremely sweet and I can understand a lot of people would prefer this.  Unfortunately for me it was too sweet and I couldn’t finish it but if you like sweet milkshakes this is going to become a new hot spot for you.  They also do a selection of chocolates, favours and even a leather satchel embossed with their coat of arms.

All in all, this is going to be a mecca for modern weddings, those with a super sweet tooth and those who just appreciate art in whatever format.  Me, I’ll stick with William Curley for my cake and Paul A Young for my chocolates 😉