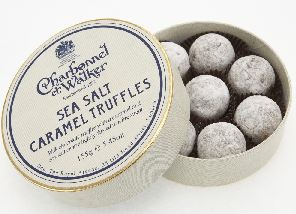 I’ve been waiting to review these sea salt caramels for a while now. I have known they were coming out for what seems like YEARS (while it was, in fact, merely days, I would argue that it is a number of generations when measured in the lifespan of a fruit fly) and so I was quite eager to get my hands on a box.

When they finally arrived, the first thing I did was to hide them from the office. Then I scurried home (quite literally, furtive, small shuffling steps, hunched over mainly because I had about a bazillion bags that day to drag home) with my Charbonnel treasure, secure in the knowledge that the delights that I was sure awaited me within the distinctive round box with its greyish moss green tint colour and gold foil ring with distinctive bluish letting (it is the lettering, rather than the colour, which is distinctive). 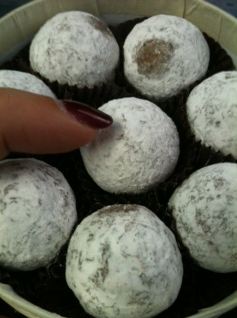 As most of you know, Charbonnel et Walker truffles have a longer shelf life. This means you can keep them for longer than 2 weeks but it also means  that they aren’t quite the same as Paul A Young sea salt caramels so I will, as I do with all chocolate, review it against its peers and not against Paul. I don’t know what Denise Acabo thinks but Paul’s sea salt caramels are (to me) the best in the world (YMMV).

My first thought was that they were HUGE! Eight truffles of a rather large proportion as I do not recall other truffles being quite so large (but I am old and my memory often fails me). The picture of my finger shows how big they are. The rather generous ‘dusting’ of sugar is more a full-on rolling on and caking on. You can smell the sweet milk chocolate under the sugar though and each cap barely restrains the sea salt caramel liquid within as you can also see from the photo.

You can see from the interior shot that this has a very thick shell to ensure they do not break en route. The sweet milk chocolate with the sweet sugar means the sea salt caramel gets slightly lost. The caramel itself is mild and not sickly sweet but for me I would have loved a bold muscovado sugar flavour in there with a stand-out flavour against the sweet milk chocolate and sugar.

This is definitely a chocolate for the majority of people out there as most folk prefer a sweet chocolate. Because they are using sea salt caramel it isn’t too sweet but it is definitely on the sweeter end of the truffle spectrum.