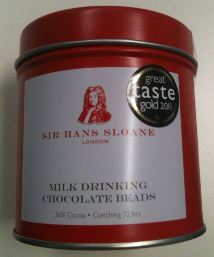 When the small but heavy box came to the office, I wasn’t sure what it was.  It had been awhile since I had received any chocolate and so it wasn’t my initial thought as the box landed on my desk.  Truth be told C4 was my first thought given the size and weight of the package but thankfully it wasn’t 😀

I have no reason to think I’ll get a bomb… well, no… let me rephrase that.  Given the experiences of another chocolate blogger, I have no reason to expect that I will receive a bomb as the result of a bad chocolate review as I tend now to simply not publish them.  If I get something sent to me and I really don’t like it, I will stay silent on the matter.  Sometimes I even give the chocolate a second chance to make a first impression but usually I simply stay silent.  I figure that, given my silence, I should avoid the bombs aimed at me by disgruntled chocolatiers 😀 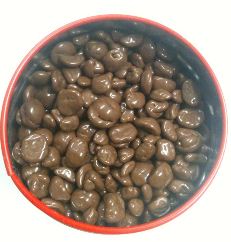 So this heavy box landed on my desk and what was it but a large can of Sir Hans Sloane hot chocolate drinking beads in milk chocolate.  Thank goodness too as I already had the dark chocolate 😉  I quickly hid the hot chocolate away and saved it for a review. 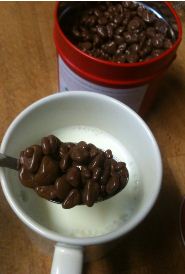 The chocolate beads here are kind of squished whereas in the dark chocolate they are actual round beads.  They are sweet as you would expect from milk chocolate and when I added them to the milk I had zapped in the microwave for 1min 45sec they melted quite readily.  I used my whisk on this which I had received from Kokoa Collection and it mixed extremely well. 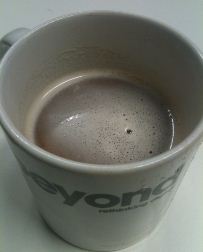 I’ve hidden the tin because both as snacking chocolate and drinking chocolate, this stuff is delicious.  The perfect pick-me-up during a long afternoon at the office!