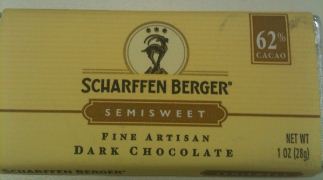 There’s something about dark chocolate that makes people think it is awful and bitter. I’m not sure why but perhaps that awful stuff which used to be the only thing available 20 or so years ago is what made them think this way. Today at the supermarket, specialist shops and elsewhere a huge array of decent chocolate is available.

This bar is one of a number of small bars that I was sent by Scharffen Berger after contacting them about the sample chocolate in one of their shops. I did make some purchases but I did not buy as much as I might have (like at Tcho) so I contacted them about my experience.

Scharffen Berger are like the Green & Blacks of the US. They were a small firm making bean to bar chocolate that was bought by a larger company. As far as I can tell, they remain independent of Hershey’s, sourcing their own beans and continuing to make chocolate in their traditional way with little corporate meddling. Of course, I don’t work there so I don’t know for sure 😉 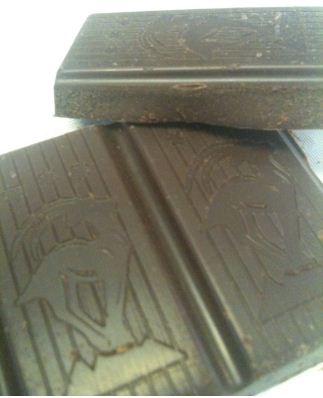 We don’t have the concept of semi-sweet in the UK – just shades of dark. I’m used to semi-sweet as a Canadian as it is squares of that which I have always used for baking. Until very recently I used to bring squares of baking chocolate back with me as I had no idea how much they weighed and all my recipes used their squares as a measure. This particular semi-sweet is a sweeter 62% cocoa content bar.

The bar had a slightly drying and bitter edge with a hint of over- roasting. I think it is super important to point out here that a *lot* of Americans have grown up eating a particularly distinct flavour of chocolate which apparently (so I’m told) comes from slightly more fermentation than European chocolate. This isn’t bad per se, just different and means the flavour appeals to a different person. As we’ll see with other Scharffen Berger bars there are different tastes for different people.

The chocolate here is actually softer to the touch than I’m used to, without the typical snap I often get. It is also ever so slightly chalky and possibly what I’d choose for brownies but not for eating (however my brownies made with high quality chocolate do taste better :-D). It has a uniform chocolate flavour with only a hint of acidity. There’s nothing to stand-out with this bar but also nothing shocking. The flavour isn’t the greatest for eating but I wonder if it was more designed for cooking given my experience with semi-sweet 😉