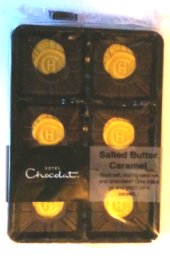 I picked up some of these when I had some rare spare time to shop in a town centre and thought I’d give them a try. Sporting the new Union Jack-esque decoration with the HC logo seal in yellow in the middle, these were very attractive looking.

I’m a huge fan of sea salt caramel, especially when the sea salt is artfully used to enhance the molasses flavour of the brown sugar. The assertion that the centre was white chocolate and caramel was a slight worry but I got them and tried one. 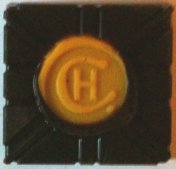 It is a bit different from the other sea salt caramels I’ve had. Perhaps it was the chocolate or the caramel, which is a bit less runny, but it wasn’t quite what I was expecting. The caramel wasn’t strongly flavoured and as it was less runny you don’t have the shock of biting into the chocolate and having the caramel run down your chin.

These aren’t bad but there are other flavours that are a little more to my liking. I think that these will appeal to folk who have found Artisan du Chocolat sea salt caramel balls too strong and Purist Extreme Caramels too extreme.