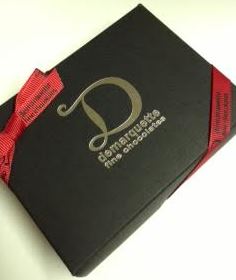 I received these chocolates from Demarquette as part of chocolates he was making for Salon and the season. I have to admit I was fascinated. Chocolate is difficult enough to make, but to choose a relative of the theobroma cacao which is a tropical rainforest tree is even more difficult. That makes these chocolates not just rare but valuable.

According to the website, “It is more commonly known as The Cupuaçu (pronounced: coo poo asoo), an arboreal fruit species considered to be a pre-Colombian crop plant which is still found wild in the eastern sub region of Brazilian Amazonia. The beans have been processed in Brazil by our partners AMMA in a very similar way to cocoa. After a number of tests and samples we have ended up with a uniquely rich aroma and deeply flavoured product.” 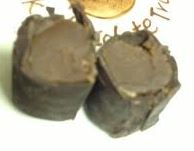 I was worried about what these might taste like. I mean, they look like chocolate but they aren’t chocolate. They do taste like a creamy chocolate with yellow fruit notes.  The chocolate truffle filling is light and delicate chocolate flavour – almost floral I’d say. There’s nothing false about it but at the same time the fruitiness is too intense for regular chocolate and the creaminess is just a bit too creamy. There is something distinct about these truffles that demonstrated that they are unique and different without being crazy weird truffle flavours.

Would I have guessed that these were a relative of the cocoa tree when I ate them? No – I would have guessed that they were an origin I was not familiar with or perhaps a criollo from a new origin I was not already familiar with. Would I buy them? Absolutely and I would gift them to a client or a friend knowing that my reputation as a chocolate expert was riding on them.