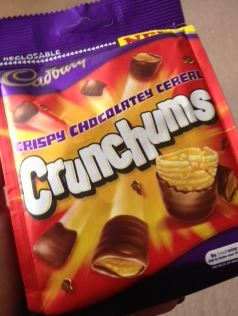 Usually at this point you’ll find me with some Dairy Milk dipping it into hot tea so it melts and then slowly eating the melted bits. But I was given some Crunchems and so I thought I’d give those a go. In the morning – after all, they are cereal covered in chocolate.

The chocolate coating on the cereal is thick enough to be substantial but not too thick that you’re chomping through mostly chocolate. The corn cereal is hollow so each time I tried to cut one to show you the inside, it crumbled and I had to eat it. How tragic 😉 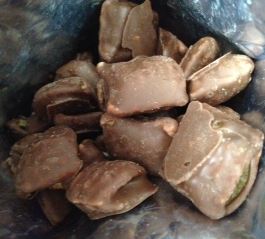 This is Dairy Milk chocolate so it is high in sugar so be careful about balancing that off and not actually eating it as breakfast 😀 I found that a few pieces was all I could take as I’ve been kind of weirdly off too much sweet stuff recently. In the race for ice cream, I have been losing. I’ll buy some and then never get to eat it *sobs*

Anyway – enough about me – so the cereal is crunchy with some particularly hard bits so there is substantial texture. The milk chocolate is sweet and the corn (to me) is a bit sweet so I’m thinking that the younger readers will absolutely devour them. They make a fun snack because of the texture as well but I have to say that the whole office and I preferred Pebbles. We all tried the Crunchems and the bag did go fast (though without the ripping and tearing that the advent calendars were subjected to!) but overall the office reaction was that Pebbles were addictive and Chunchems were… different. Would I buy them? It’s hard to get me to give up Giant Buttons for anything 😉