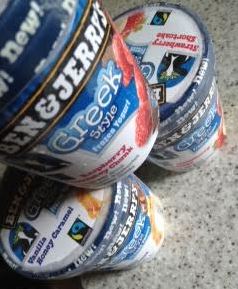 Frozen Yogurt or FroYo first came to prominence in Canada during the mad rush to massively cut down on any and all fat. Sadly this was at the expense of added sugars but hey – live and learn, right? In the years since then, frozen yogurt has remained a firm frozen favourite among the dieting and non-dieting crowd as a flavour that is both slightly tangy and sweet. A summer treat with less guilt than the usual ice cream treat.

Of course since the 80’s we have also come far in the development of sorbet, gelato, ice cream with fewer calories, quality froyo and more. Frozen desserts have moved on and developed to the point where the most common of frozen delights is a quality product. Consumers are starting to eschew the edible oil products of the mass marker for the higher quality of the more modern products.

The flavours were launched in possibly the world’s hottest room at a Greek restaurant. The heat was so intense, it melted the frozen yogurt before we had the chance to try it! Now, in a liquid state the natural flavour with honey was my favourite but we received coupons to buy ourselves some more froyo to try so what was my favourite frozen..? 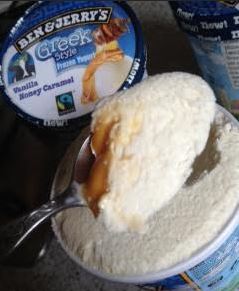 Vanilla Honey Caramel – a firm favourite melted, this has a pleasant tang with a deep dark honey caramel. The amount of honey caramel is a bit light for my tastes as I feel that the honey’s distinctive flavour adds a depth to the vanilla froyo that it just doesn’t have on its own as otherwise it’s a bit boring. Overall it was OK but frozen it wasn’t my top all-time favourite although I was really torn on picking my favourite between this and the Raspberry Chocolaty Chunk and even while writing this I’m not entirely sure which is my fav… 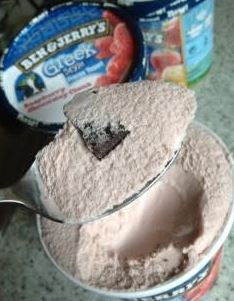 Raspberry Chocolaty Chunk – this has the tang of the froyo, the added sharp flavour of the raspberry and then the added large (but thin) chunks of chocolate. Frozen this was my favourite as the dark chocolate chunks pleasantly complimented the tangy raspberry without adding to the existing sweetness. The added texture was lovely and raspberry is one of my favourite flavours so I’m going to be biased. Melted the chocolate was uninspiring and the yogurt too tangy but frozen the balance, for me, is brilliant. 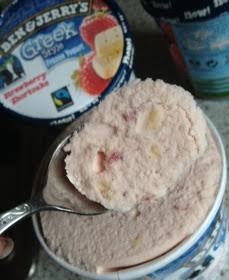 Strawberry Shortcake – I think not my least favourite but not my most favourite. I liked the texture the cookie pieces added to the strawberry frozen Greek-style yogurt but it doesn’t appeal to me as much as the raspberry. Still a clean strawberry flavour with no actual taste of artificial flavour enhancements, this is going to send strawberry lovers into a tizzy. It’s a bit sweeter than the raspberry to me but that is a factor of the fruit as well. This is still delightful when frozen.

Overall, Ben & Jerry’s captures the Greek Style craze in a frozen dessert well, balancing what we expect to be authentic flavours with quality production. They are all available at my local Sainsbury’s in Didcot (unlike Green & Black’s Crispy Milk bars which I remain bitterly disappointed about) so they’ll be near you too!