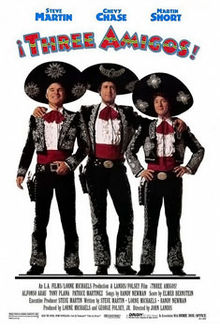 El Guapo would have trouble trying to take this bar off me I’ll tell you. He could try whatever he wanted but he would not part me from this bar. Who is El Guapo? Well, The Three Amigos are from a 1986 film with some of the funniest guys in comedy at the time. They were a comedy group of pretend heros a town hired to save them from the baddie El Guapo. Lucky, one of the characters in the film, says “In a way, all of us has an El Guapo to face. For some, shyness might be their El Guapo. For others, a lack of education might be their El Guapo. For us, El Guapo is a big, dangerous man who wants to kill us. But as sure as my name is Lucky Day, the people of Santa Poco can conquer their own personal El Guapo, who also happens to be *the actual* El Guapo!” 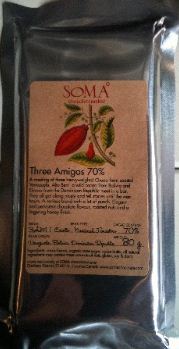 This Three Amigos bar is a combination of three chocolates – Venezuelan (Chuao), Bolivian (Alto Beni) and Dominican Republic into a harmonious joining together of chocolate. The scent is deep dark chocolate and a slightly dry edge. It is a rich, deep scent and you know it is something special just from the initial smell.

The taste is immediately rich and nutty and punchy which develops into a fruity and acidic middle as it melts. The chocolate does melt rather quickly compared to others and mellows into a slightly organic honey flavour without being sweet. It is an odd end which is difficult to explain but is an organic flavour and has that unique flavour that honey has. The taste vanishes quickly though and it would be nice to have it linger longer but it is very clean. 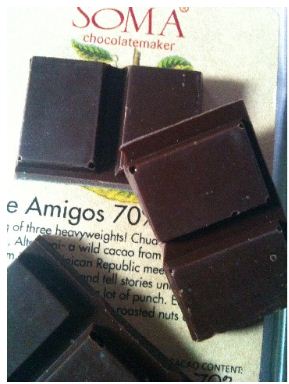 I have to admit that this is a very nice and extremely edible bar. The chocolate isn’t too intense and lacks the acidity other chocolates have. The flavours are subtle though and they are more elusive than with each of the distinct chocolates from these regions. This makes it a more enjoyable bar for many I am sure as it is more approachable and understandable than some of the more complex bars.

I really like this because it is s not too complex and it is absolutely delicious. The chocolate isn’t bitter, isn’t sweet and yet has a distinct flavour. The notes in the chocolate di disappear quickly as each develops in the mouth but it means everyone will get something different out of it. What else can I say but – YUM!