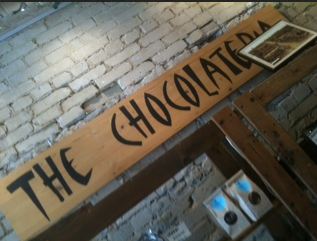 I’m not sure whose chocolate BlogTO were trying (nor any of the other magazines) when they gave favourable coverage to La Chocolateria but in my opinion they must have been eating someone else’s because only someone eating something completely different could have given that confection I had the misfortune to buy and place in my mouth good chocolate.

Now, before you think I’m being unfair to the chocolate and the somewhat less-well-educated-in-chocolate-facts surly gentleman who ignored my friend and I while we were shopping in favour of scraping ice off the side of a freezer (yes that is what he is doing in the picture – I had ages to snap it so did), let me explain from the beginning and finish with why I think you have to be either trying some different chocolate or be in a different state of mind to like the chocolate.  It all started on a day unlike any we’re likely to see in the UK…

The day started when I popped over to visit Doreen at her hotel where she was staying for a writers conference (she’s writing a book). We tried some of her Thomas Haas, some of her genuine Peruvian just-out-of-the-jungle chocolate (complete with spider eggs) and some of my Hotel Chocolate, Idillio and Beschele. Having munched through some of the award-winning chocolate, we set out to visit a few chocolate shops. Xococava being our breakfast stop (don’t ask me about the churros but they do use Michael Cluziel for some chocolates), we continued on to the Chocolateria wanting to buy some chocolate. 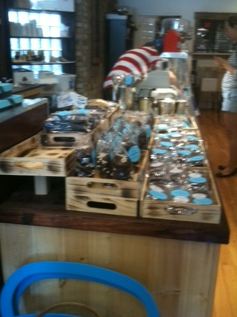 Now, in Toronto, in the summer (which starts mid-May some years), chocolate shops switch to gelato and ice cream. A natural progression and it means there is less chocolate on offer but you’d think that it would mean only the best sellers remained. So we perused the shop and cooed over the lovely-looking chocolate. Even as we made positive noises the warning signs were there. The bacon bars that were left were bloomed. Who the heck leaves bloomed chocolate out? I mean, seriously chocolate shops of the world, if the chocolate has bloomed please remove it from sale or someone like me is going to come along and you’ll never know you lost out on coverage (or be rude to us and insult us and we’ll review exactly what happened, never go back and encourage others to avoid your chocolate lest they buy something bloomed too). The rest of the bacon bars were actually not the kind I thought could possibly review well so I left them.

I cooed over the potato chips thickly slathered in milk or dark chocolate, the turtles, honeycomp/sponge toffee and more. I wondered what to buy as I was on restricted baggage space and weight so asked for help. BIG MISTAKE. Interrupting the surly man behind the counter and fully disclosing that we were here to *BUY* chocolate to review was clearly the wrong approach. Asking for help was as well. It was as though we’d inadvertently struck a nerve we didn’t even know was exposed.

Perhaps we rubbed the raw nerve inadvertently the wrong way repeatedly by revealing who we were and asking for help with our purchases. Perhaps it was a bad day for this owner or perhaps he had just heard his dog died from eating chocolate a blogger fed it. Whatever the reason, I was shocked by what followed our request for help and even then, knowing the horror that awaited me upon learning they used the lowest quality coverture I could imagine, I still bought stuff (fool that I am).

When asked what was the best example of the store’s speciality we were informed all of it was good. When I refined the question and said ‘well what would you put forward for review’ we were again told ‘all of it’. When I refined it further and said ‘if you were entering a judging competition, what single product would you pick’ we finally heard that the most popular item were the turtles and the chocolate covered sponge toffee. So dutifully I bought some turtles and chocolate covered sponge toffee (that I won’t inflict on anyone).

Having chosen we then endured a tirade of ignorance we tried to politely correct (fairtrade does not mean the absence of child labour, Africa does not produce the best beans, there is more than Callebaut on the market FFS), we left the shop, vowing to never return and befuddled why it got such great reviews. We did, however, have some of the best the shop could offer so we thought we would find the answer in there.

Boy were we shocked.  When someone who reviews Soma positively gives that same spotlight over to this shop, in the same article, with the same glowing recommendation, you expect something innovative. Perhaps had there been some bacon bars that had not bloomed I would have discovered that elusive secret joy. Alas I did not. It is not clear to me why the turtles are so popular. Yes I can see they are somewhat better than the boxed kind but really, I’m thinking the boxed turtles may have the edge. The caramel was not outstanding, it was merely there. The chocolate was overly sweet and lacking in distinctiveness. Clearly I’ve been eating too much Valrhona (a coverture available widely to Toronto chocolatiers) or Michael Cluziel (another coverture available to Toronto chocolatiers) or something becaiuse they were not good. Maybe the pecan needed something more, maybe the caramel needed a touch of sea salt, maybe it just needed to be better.

The chocolate covered sponge toffee. Well, their paper bag with its taunting clear front window displaying the treasures within hid a secret – the secret of a really mediocre taste. They were nothing to write home about and the, to my taste, poor coverture was not balanced off in any way with the sponge toffee. Dull bland sameness.

I’m not sure why so many people rave about this shop. Perhaps press who book their visits in advance are given different chocolate to try. Perhaps if we had just picked something (we would not have chosen turtles), we would have chosen better examples. Perhaps the Canadian palette which runs to sweeter things prefers bad (in my opinion) chocolate. Whatever the reason, from my point of view don’t bother visiting. It’s a waste of a TTC fare and a waste of time you’ll never be able to get back.