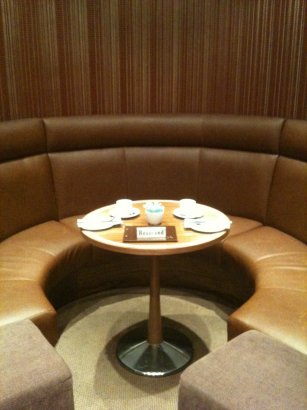 A hotel I spend far too little time at conferences in, the Strand Palace Hotel is located ideally for the London tourist.  Nestled near all sorts of tourist attractions, including the very funky Covent Garden, this hotel must be one of the more popular places to stay.  Now while you’re there you can get a traditional British afternoon tea themed for Christmas. 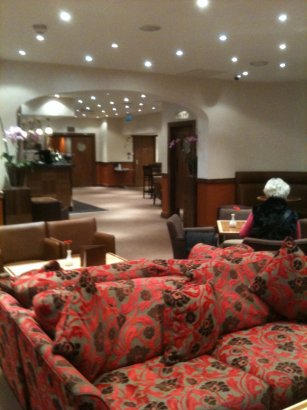 The area we had reserved for us (fellow chocolate blogger Dom and I) was a lovely booth but as you can see, the whole place is a cosy setting despite its location in a hotel.  While it was clearly a hotel bar, the touches of couches, private booths and excellent service does make it a lot less corporate and much more fun.  The waitress was excellent, seating us without too much fuss though when we walked in because no one was at the front we did just have to go to the bar to be seated.  That was only because we had reserved beforehand. 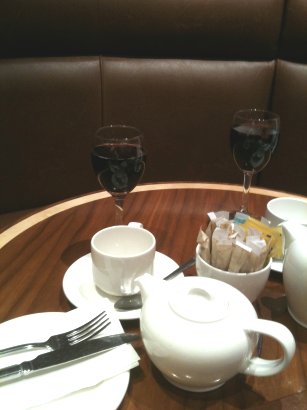 We had the option of adding mulled wine to our Christmas afternoon tea – obviously making it even more festive – so we did so and were glad we opted for it.  The mulled wine came piping hot with cloves and cinnamon bark still in the glass. 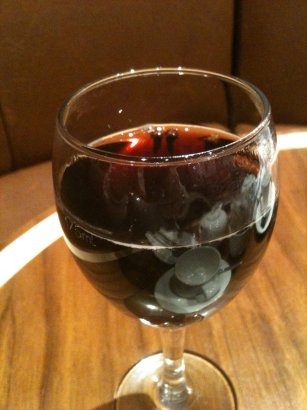 While in other things I don’t like bits, I did like the added touch of mulling spices in the mulled wine.  It wasn’t as sweet as other mulled wines and the flavours were more muted but this was likely because they had made it themselves.  The wine was not overly bitter or acidic and was of a good enough quality to make a decent mulled wine because as those who drink lots know – the base wine you use has a dramatic effect on the end result.

We tried two teas – the traditional Earl Grey and the more festive Christmas tea.  The earl Grey was standard and not over brewed.  The Christmas tea seemed to be a rosehip and hibiscus blend with possibly a bit of rhubarb but that I wasn’t sure of.  The flavour of the rosehip was clear with the undertone of the hibiscus and the tea was a festive pinky red colour. 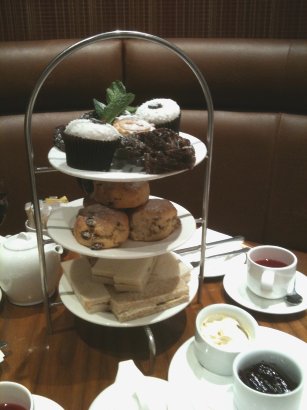 The main food part of the tea arrived and I believe that based on the cost (£19.99 with mulled wine, £15.99 without – both prices are per person) this was actually right on the money.  The finger sandwiches were the traditional cucumber which was sliced lengthways so none of the mushy centre of the cucumber was present and of course the skin gave it plenty of flavour.  The turkey and cranberry was good as was the “stuffing” sandwich (as I termed it) of nuts, dates and cream cheese.  The ham was thick with grain mustard and so there was something for everyone.  The scones were slightly more brown than I usually have them myself but this might have been because we were late for our booked time by 15min.  These were enhanced by the hint of cinnamon in the cream for sure and the cranberry jam with the cinnamon cream added to the festive flavour.  The cakes on top were varied with a chocolate and cranberry dense bundt cake slice, traditional Christmas cake with lots of fruit and good crumbly cake, a mini mince pie and a chocolate snowball cupcake.

All in all I think this Christmas afternoon tea is right on the money.  If you’d like to book, it is available from noon to 5pm daily in Johnstons Brasserie which is inside the Strand Palace hotel, walk all the way to the back (we missed it first time) and it’s there.  If you book online, they’ll give you a free tin of tea as a gift – excellent option I think!