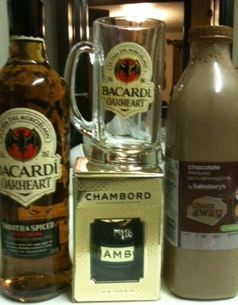 With all the holiday parties and gatherings, there are a lot of cocktail recipe searches happening but the problem is, some people then don’t take the time to search out the right spirit for the job. While I love slow gin, it isn’t great in a G & T and certainly wouldn’t be right in a dry martini. I was sent this bottle with the glass but bought the Chambord myself 😉

Bacardi Oakheart is actually more than just a flavoured rum. Bacardí’s Master-Distillers use a unique blending process that begins with the mellowing of rums in charred, American, white oak barrels to give the rum base an oaky flavour. Once they have created this base, the Master Blenders add a range of flavours, including cinnamon, nutmeg and honey before filtering the liquid. This has made a rum what has an interesting nose and different flavour. It isn’t sweeter but there is a distinct flavour to the rum that I enjoy more than others on the market. I was a big fan of certain other famous brands but this seemed, to me, smoother and more palatable.

Perhaps it has been awhile but this spiced rum is deliciously different and I liked experimenting with it. In fact, it was a favourite neat at a recent gathering I had. I’ll bet it won a few converts! I was sent 3 recipes with the bottle but only one really appealed and I did adjust it slightly to my taste.

Simply add the Chambord and Oakheart to the glass, stir a bit then add the chocolate milk. Give it a good old stir and enjoy! I used a mini whisk 😉

Make something different for your party!