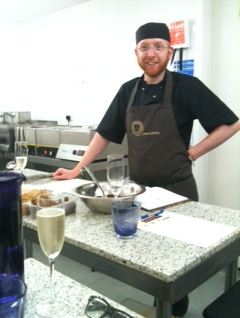 I was lucky enough to be invited to the invention of a brand new hot chocolate in the not-so-secret lab downstairs at Paul A Young’s Soho shop.  The Folly was launching their own bespoke hot chocolate during Chocolate Week and wanted to create it with one of the recognised hot chocolate experts – Paul A Young. But they didn’t want Paul to just create it in isolation – they brought a group of regulars and two bloggers (one of them me – I’ve been to The Folly several times but I’m not a regular) together and we created something uniquely special.

We started the evening with prosecco which I think dulled our fruit receptors a bit but got us talking – well, it’s my excuse! I had trouble pulling out the fruit notes and everything tasted of raw unroasted nuts to me which isn’t right I know because I know the chocolate. But enough about me! 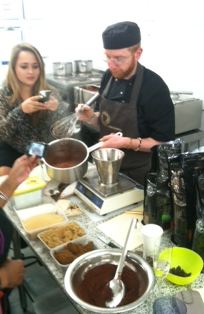 There were LOTS of us down there including a woman who grew up on RAW HOT CHOCOLATE! How cool is that?!? She and all of us tried around eight different chocolates in their natural forms and then we created a blend of 2 different chocolates, 2 different sugars and a very light blending. We chose a pretty common Valrhona and a not-so-common Michael Cluziel chocolate, both of which were softer chocolate flavours, low acidity, low fruit, heavier nuttiness without being aggressively so and deeply chocolate. The sugars we chose were a proper soft light brown and a sprayed lighter beige granular sugar. Having read a blog about sugars, I know one was sprayed and one was excellent 😉 It was made to Paul’s recipe from his book and was DELICIOUS. 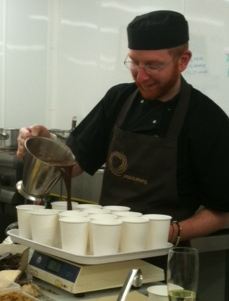 Interestingly although everyone preferred the less sweet hot chocolate, we also all agreed that the masses (so to speak) will be used to a sweeter chocolate and we felt we should go with a sweeter blend for everyone but us. We discussed, argued, yelled, discussed some more and eventually agreed that at the launch of the hot chocolate, it would be the *LES SWEET* one that would be made and it would be served with additional sugar. That way someone like all of us would like it as is and something like everyone else could add sugar to taste.

So if you’re in the City and want to try a bespoke, unique, totally individual  hot chocolate made with real chocolate from Valrhona and Michael Cluziel two of the top names in chocolate, head over to The Folly and from Chocolate Week onwards for the winter season you’ll be able to taste our glorious creation.