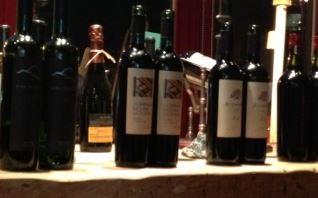 I was invited to Gaucho to taste their special Chocolate Week menu. Now, those of you who know me know that Gaucho is not in my happy bunny books but I decided to give them a chance and go to this dinner and see what they have cooking (literally). I got an interesting insight into what they have planned for everyone for next week should you choose to indulge.

We started with a chocolate and malbec tasting – We tried Vina Patricia, made from the Malbec grape, which comes from Gaucho’s very own 80 year old vineyard found in Lujan de Cuyo, west of the Mendoza Province of Argentina. In order to extract the different flavour profiles of Malbec through chocolate, Vina Patricia was matched with three different types of chocolates. The wine itself was immensely drinkable with or without food and the flavour, while not light, absolutely complimented the chocolates. The violet though – eurgh! 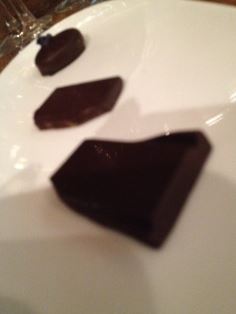 Chocolate #1 – A 70% dark chocolate chosen to highlight the classic match between Malbec and chocolate. The bitterness of the chocolate is countered by the sweetness of the tannins that Malbec is so famous for. The fat and protein from the chocolate softens the wine leaving a silky and velvety texture on the pallet. It was really only just OK but most of the people trying this will *not* have tried the breadth of chocolate I have and so it will likely be delightful.

Chocolate #2 – A coffee and vanilla chocolate was selected to extract the oak influence of the Vina Patricia. Similar to the first chocolate the fat and proteins from the chocolate softened the wine leaving a silky and velvety texture on the pallet. The coffee was over-roasted and so it made the chocolate unpleasant but the wine soothed it.

Chocolate #3 – The most controversial choice of the evening was the violet flavoured chocolate. Malbec is extremely well known for its floral characteristics with violets always present The violet chocolate was chosen due to its strong character. It highlighted the Malbec’s ability to tone down the strength of the chocolate whilst the chocolate lifted the floral side of the wine.  The chocolate was not pleasant and quite soapy but again the wine saved me. 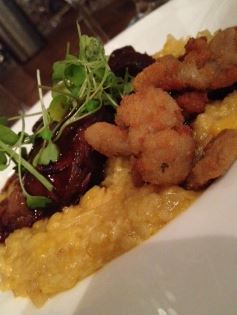 First course: Braised beef cheeks with lamb sweetbread popcorn in almonds and breadcrumbs, humita and chocolate jus. I tried the sweetbreads. I honestly did despite knowing what they are. I promise you I did… it was nice. The cheeks were very nice but Jun did them better 😉 >fangirl<
The dish was served on a bed of humita (sweetcorn puree), this incorporated Argentine heritage as sweetcorn originated in Argentina. Interestingly the name of the wine ‘Mortero’ is named after the large rocks in Salta that the natives used to grind the corn on to make flour.
Wine: Molina Mortero Malbec – Molina Mortero Malbec is produced in the Salta region of north west Argentina. Salta is situated at 2000m above sea level and is known for producing very rich, intense and full bodied Malbecs.
The first dish was the richest of the three dishes served. This required a Malbec with similar qualities to complement the dish. I wasn’t a fan I have to admit as I felt the wine jarred slightly with the flavours happening on my palate but I think for most people the strength of the wine will be necessary to counterbalance the flavours in the dish. 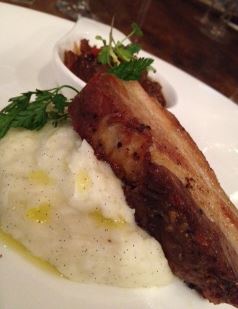 Second course: Slow cooked pork belly, white chocolate and vanilla mashed potato and chocolate chilli pork matambre. This was my least favourite dish. The overly vanilla mash jared against both the matambre and the pork belly. They were like three different dishes on a single plate.
Wine: Atamisque Malbec
Atamisque is from a region called the Uco Valley in Mendoza – Argentina’s largest wine producing region. This match was made due to the white chocolate and vanilla which featured in the dish. Atamisque  has a beautiful concentration and is made from very old vines in La Consulta, Uco Valley.
Atamisque is oaked by the winemaker which generates a strong presence of vanilla and chocolate – the perfect match for this dish. 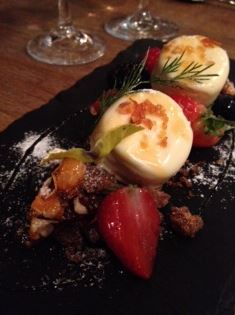 Third course: White chocolate mousse with milk chocolate crumble, fresh and frozen fruits and almond praline. This was delicious!
Wine: Zuccardi Port Malbec which was probably my absolutely favourite wine of the entire evening!
Dessert requires a sweeter wine than savoury courses. This port style Malbec is made from one of Argentina’s most prestigious wine making families, the Zuccardi family and provides the perfect blend of sweetness to compliment a sweet dessert. This is wonderful value for money at only £4.50 a glass.