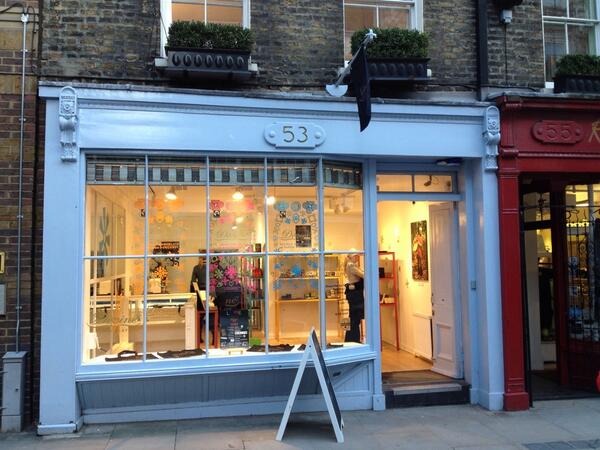 This is the second year the Divine shop has popped up in Covent Gardens -this time at 53 Monmouth St in the Seven Dials area. Now, I have to admit to going via Roast + Conch but sadly they are not doing the all caramel egglets this year *sniffles* (or at least not yet) so I left empty-handed and popped along to the only company I know of who has a palm-oil free caramel – Divine Chocolate.

Divine is a huge supporter of Fairtrade Fortnight, as well as Chocolate Week from its earliest days. They are co-operative owned and passionate about chocolate. The co-op is run in an amazing way which I keep discovering more about. For example, the person who weighs the cocoa is elected to that position and the co-op is known for its fair scales. Something I take for granted like fair scales is something they cherish in Ghana and something the Kuapa Kokoo is known for.

One of the other things I learned was that besides two new bars, the farmers also now have their Kuapa Hour on the local radio in various places in Ghana. They are extremely proud of the things they are doing and given the chocolate tastes nice as well, I think their pride is coming through in their beans. While Ghanaian cocoa isn’t as dynamic and all over the flavour profile as Vietnamese chocolate, it is that consistency and stability of flavour that makes it perfect for Divine and therefore pastry chefs and bakers. 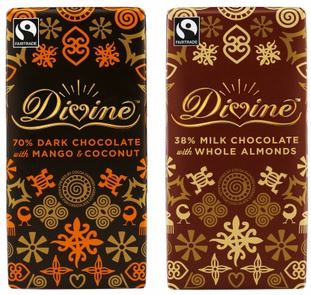 The two new bars at the shop are an absolutely addictive Almond Milk which is a bit darker at 38% but still lovely. This is actually replacing hazelnut so if you are a hazelnut far rush to the Seven Dials shop NOW and grab the last few bars before they are gone. The almonds are whole almonds fairly traded from Pakistan if I am remembering correctly. The whole bar is made of Fairtrade ingredients (where possible – the milk isn’t but can’t be) meaning unlike other Fairtrade chocolate, this is over 80% Fairtrade ingredients with no offsets at all. Delicious AND ethical – what more could you ask for?

The other new bar is a dark mango and coconut bar. Now, I’m not a massive fan of the desiccated coconut because of the mouth feel and the coconut reminds me of suntan lotion *but* I did find this one was nice. The dark chocolate helped create a more balanced coconut smell for me and while there was lots, I was plenty distracted by the delicious mango. The chunks were absolutely yummy. 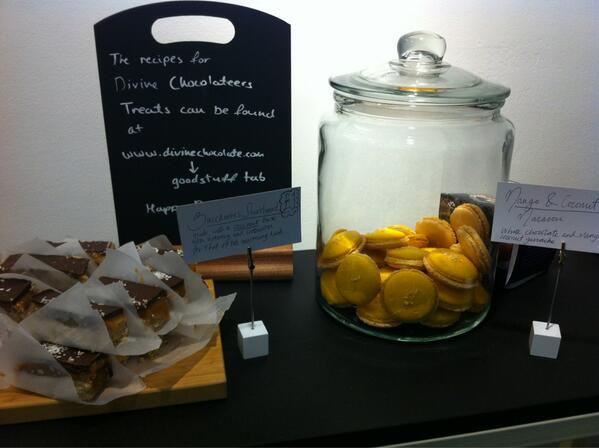 One of the stories Divine never seems to tell is that it strives to be Fairtrade in everything and they make choices based on their ability to source Fairtrade products. Their dark chocolate bar is, I believe, over 95% fair trade with only the soy lecithin being not Fairtrade and the milk bar is over 80% Fairtrade with only the milk not being fair trade. It is also palm oil free as are *all* their products, including the way the ginger is prepared for their ginger bars *and* they had a special caramel made which was palm oil free.

Divine is a company with fairness at the heart of everything they do. From the farming co-operative that owns the company who pay a fair price for the cocoa in Ghana to the ingredients they select for their chocolate which are only Fairtrade (where possible – milk and lecithin being the exceptions) and the choice to exclude palm oil at every level through to making their own caramel, Fairtrade and fairness is there at every level. By choosing Divine you are making a choice that benefits farmers and you, making everyone’s life better.

You can visit the Divine pop-up shop only during Fairtrade Fortnight so get on down there quickly!