It was a day in San Francisco I won’t soon forget. Hot on the heels of judging chocolate I had flown thousands of miles to the US and was trying chocolate there. I remember the look on the face of the shop assistant when I told her what the piece of chocolate I was trying had notes of and her dogged insistence that I was wrong.

That dogged insistence led me to a) wonder if she had tried any in truth; b) if they had stored it somewhere weird and; c) contact the company because how many sales were they losing based on this chocolate. The company very kindly tried to send me some bars to the office in the US while I was in the US but regrettably the US post is not as good as UK post and so the chocolate arrived after I departed and a friend brought it back from San Francisco. 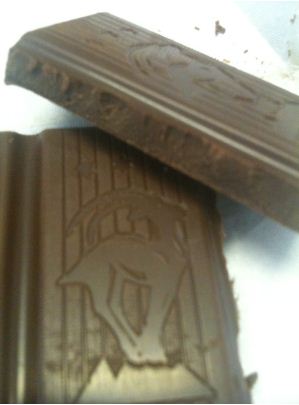 I think they may have sent me one of everything they had so I’ve shortened the reviews a bit… sort of… Well… you know me 🙂 This first bar is a milk. I started with the milk because I think this is going to be the bar that most people grab. Despite the great strides made in the manufacture of high quality chocolate and especially the delicious and almost milky dark chocolate (think porcelana) they still insist on high sugar milk chocolate. So here is the Scharffen Berger milk chocolate:

Hmmmm… I found it malty but has that typical over-fermented flavour (it has a strange flavour I’ve been told is over fermented) which I believe the American palette favours (so I have been told and is why Hershey does so well). In this case, this milk chocolate bar it is like a high quality, cocoa rich M&M interior (which I happen to love thankyouverymuch). The milk chocolate is sticky and the chocolate is soft to the touch. This is typical of milk chocolate and it doesn’t detract from it at all.

I think this is a great introduction to a better quality milk chocolate. Now I’m craving my almond bar which is made with milk chocolate!